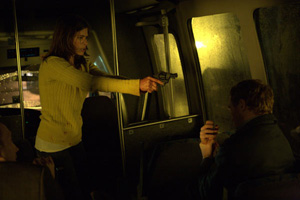 Cinema was initially developed to suspend the reality of the viewer. For the most part, audiences are willing to invest a couple hours to leave the stress of daily life to watch an alien find his way home or a wizard battle the Dark Lord. It’s really all in good fun. However, in the age of quick and easy entertainment, postmodern films have developed into a means of producing unoriginal works of self-deprecation.

Mel (Peyton List) and Jules (Cameron Goodman) are best friends who just flew home from their weekend vacation in Mexico. Sick from the plane ride and homeward bound, the girls are stranded late at night on an ominous rain-drenched sidewalk.

Luckily, a shuttle driver (Tony Curran) is very keen on taking them home for a discounted price. In an unforeseen twist, the friendly driver is not so friendly after all! Who would have seen it coming, but the friends, as well as two guys they pick up at the airport, are kidnapped and forced to cooperate as the night goes on and events turn fatal.

To keep the ending somewhat a mystery, Mel and Jules are “sold” into a fate that is a relatively taboo subject in most media and cinematic coverage with the exception of like-minded, mainstream thriller-horror-teen suspense flicks.

I’m trying desperately to remain vague on the off chance that a reader is interested in seeing this film. Through the blood, guts and flat tires, the film has one thing I liked: an ending that’s atypical of films within the genre. Though the camera work is uninspired, the acting is subpar and the plot spirals into careless writing, the ending leaves you questioning the ethics of American business, especially in the current state of the economy.

Ultimately, Shuttle is a thriller that maintains all of the typical, clichéd techniques of a bland Hollywood picture without the originality factor. The chopping off of fingers and gun-happy murders depicted on the screen do not compare to the horror that the viewer experiences in having to sit through the overdrawn 106 minutes of film.

As a first time writer-director, Edward Anderson does a decent job of setting a tone of increased tension and claustrophobia. He does not, however, succeed in creating compelling characters and situations. Though the message of the film is meant to be taken seriously, reality can be suspended only so far.