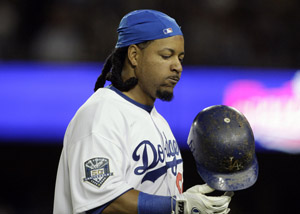 Manny Ramirez and the Dodgers have failed to agree on a contract.
(Credit: Ron Cortes/Philadelphia Inquirer/MCT)

Who is to blame for the inability to sign Ramirez of late?

Several scenarios deserve attention. The first one is the nation’s economic crisis.

Since George W. Bush’s administration led the States in its second term, the economy has gone to the dirt. The nation is still over a trillion dollars in deficit. This has resulted, especially this off-season, in a vital decline in baseball’s free agent market.

Only pitcher CC Sabathia and slugger Mark Teixeira have arguably signed prominent contracts. However, the Yankees signed both, and they have the reputation for overspending on talent.

The Dodgers are the second reason. Ramirez has always sought a four-to-five-year deal worth at least $100 million. Thus far, the biggest contract offer proposed to him has been that of a two-year deal for $45 million by Los Angeles, but with deferred payments.

Who in this world wants to work and receive deferred payments for the duties performed? Ramirez is interested in the contract, but with no deferred payments. The Dodgers should just give it to him.

Agent Scott Boras is the third possibility. Boras is unarguably the best agent in baseball operations. Nonetheless, he is a hardheaded individual who is difficult to negotiate with at times, and he has the tendency to produce complexities in negotiation terms. Boras always seeks three options: his way, his way and his way.

Finally, Ramirez is to blame for his unsigned status. Call it the Manny-being-Manny concept, or his negligence to accept the fact that there is a lack of money due to the recession. Ramirez should just sign the contract offered by the Dodgers.

After all, no other team would probably end up offering more. More importantly, no other city would honor and be more receptive to him than Los Angeles.