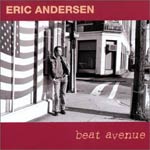 A lot of stories blow down Eric Andersen’s Beat Avenue, and many of them are told on the title cut of this double-disc opus. "Beat Avenue," ostensibly about mortality and dreams turned to smoke, is a stream-of-maybe-unconsciousness wrapped around the story of how one man reacted to the murder of JKF. Andersen uses the 26-minute song to reflect on other memorable moments, like being puke-full of wine, playing with bluesman Sonny Terry, and an exceptionally satisfying time with a woman. His singing fully conveys the bottom line: you can’t get it back. Eric began his career in Greenwich Village in the mid-‘60s after soaking up what the "beat’" poets of Haight-Ashbury had to offer. Eric Bazilian (the Hooters) plays electric guitar throughout and rocks over Andersen’s acoustic strumming on "Ain’t No Time To Bleed." Phoebe Snow is on the record, as is the accordion-playing of Garth Hudson (The Band.) Lesser-known musicians round out Eric’s band, including his daughter, Sari. Andersen could feature the hundreds of known artists he’s worked with, but the focus would still be on his portrayal of the worldweary everyman. A little tired, but still going, like the guy in "Salt On Your Skin," "I can feel myself sinking back to the earth…"