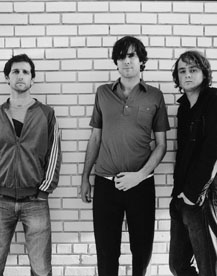 The British trio Keane has experienced the sort of year most young bands would kill for, selling millions of records in Europe, winning two Brit Awards (England’s answer to the Grammys) and performing to sellout crowds around the world.

But what made the group, which seems set to reach Coldplay-like heights of fame, really nervous? Appearing recently on “Saturday Night Live” alongside guest host Paris Hilton.

“It was scary, probably the most nerve-wracking thing we’ve had to do,” said lead singer Tom Chaplin during a phone interview from Boston. “After a year of touring, we’re used to playing shows. But with something like that, the expectation is so great. The show is an institution in the States.”

Keane lived up to the challenge and won over a whole new audience of fans in the process, playing their insanely melodic singles “Everybody’s Changing” and “Somewhere Only We Know,” a song that got its first blush of exposure in a Victoria’s Secret commercial.

Soon after the “SNL” performance, Keane’s debut disc, Hopes and Fears, re-entered the Billboard Top 100, with sales headed toward the million mark.

But what about the really important stuff? What’s Paris Hilton like? “She was cool,” said Chaplin. “Weirdly enough, she seemed a lot more intelligent and down to earth than she comes across.”

It’s a polite, mannered answer from a polite, mannered band. Hopes and Fears is filled with bright choruses, hummable melodies and an overall sense of nice that has earned Keane plenty of suspicious glances from rock’s credibility police.

And then there’s Keane’s lead guitarist. Or, more accurately, the lack of one.

The band formed in 1997 and kicked around unsuccessfully for years. In 2002, they lost their guitar player and figured they’d have a go without a six-string at all.

“It really was incredibly liberating,” said Chaplin. “It forced us to try and change things up a bit. And we’ve found we can get the songs across in a much more clear way that suits the feel of the music much better.”

“Every guitar sound has been done to death,” said Chaplin. “The piano is a blank canvas. And we’ve been experimenting with pedals and amps to mess things up a bit. It’s really exciting.”

While Keane has already connected with American audiences, they’re not content to remain a passing fancy in this country. Hopes and Fears produced four hit singles in England, and they’re, ahem, keen to replicate that success here. Chaplin said his band plans to spend much of the year touring the States.

“Whatever band you talk about – like U2 or Radiohead – there’s an electricity about what they do,” Chaplin said. “They have songs that really connect with people and give them a true emotional experience. We aspire to that, and we’re willing to put in the time.”

Hopes and Fears is currently available. Keane will play April 30 at the Coachella Festival in Indio, Calif. For more information, visit www.keanemusic.com.