WIN SOME, LOSE SOME: Major Highs and Lows This Week 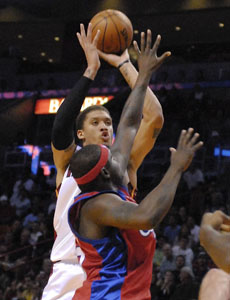 The Lakers’ Bench Mob failed to bring their normal energy to aid the fatigued starters. Instead, it was two of Denver’s reserves, J.R. Smith (22 points) and Chris “the Birdman” Andersen (tied a career-high seven blocks, 12 rebounds and 11 points), who shined.

You would have thought that the Lakers would have come out really strong on Sunday against the Suns in Phoenix to make up for the less than stellar showing against Denver. But no, the team was lethargic and dragging from tip-off.

Despite a third-quarter surge led by Kobe Bryant, who scored 17 points in a four-minute span and ended up with 49 points and 11 rebounds, the Lakers couldn’t pull it together and lost 118-111.

On Friday, the Lakers will host the 18-40 Timberwolves at Staples before heading to Portland (36-22) March 9.

This week started surprisingly well for the 15-45 CLIPPERS. The squad hosted the 47-14 Celtics Feb. 25 and came through with a 91-93 victory. Even though they are still missing Al Thornton and Chris Kaman, the team hustled against last year’s world champs.

Forward Zach Randolph led the team with 30 points and 12 rebounds, while point guard Baron Davis tallied 16 points, seven rebounds and five assists. Unfortunately, rookie Eric Gordon left the game in the third quarter with a bruised left shoulder and is still on the injured list.

The Clippers could have really used Gordon’s athleticism and speed on Friday, as they traveled to Sacramento. Even with the return of Clippers forward Thornton, the Kings, who currently have the worst record in the league (13-48), sailed past the Clippers, winning 98-86.

The Clippers returned home to host 25-35 Charlotte on Saturday night.

Randolph had 33 points and nine rebounds, but it wasn’t enough to contain the on-fire Emeka Okafor and newly acquired Raja Bell. The Bobcats won 100-95.

PLAYER OF THE WEEK: ZACH RANDOLPH

Randolph had two strong efforts this week. He made the final three points to cinch the Clippers win against Boston, then had another solid performance against the Bobcats on Saturday. A healthy Randolph is instrumental to the team having a successful remainder of the season.

All stats as of March 2.