PHOEBE IN WONDERLAND: Huffman and Fanning Retreat Down, Down, Down the Rabbit Hole 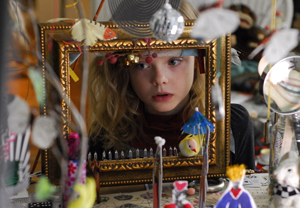 There’s a good reason why Felicity Huffman doesn’t like Lewis Carroll’s children’s novel Alice’s Adventures in Wonderland: It scares the crap out of her.

“Ironically enough, Alice in Wonderland makes my palms sweat,” admits Huffman. “It just makes me so nervous and scared. I don’t like the chaos in it.”

She may not venture down the rabbit hole any time soon, but the Oscar-nominated actress is starring in a film that is a textual enlightenment of Carroll’s overtly absurd classic, translated and channeled from fantastical prose into modern circumstance.

Phoebe in Wonderland stars the talented Elle Fanning as Phoebe Lichten, a precocious, temperamental, imaginative girl who is unable to understand the boundaries placed upon her by a rule-happy world. When she is selected to play Alice in a grade school production of “Alice in Wonderland,” Phoebe becomes immersed in the whimsical make-believe world in which she is the star.

On stage, she is invincible. It is her real-life afflictions that cause her to retreat into a land of wondrous creatures and people.

When voices in her head convince her to jump off high platforms and spit at fellow students, Phoebe’s behavior spirals out of her control. She alone can burst through the looking glass of what is real and what is not.

Fanning lights up the screen and shines the entire 96 minutes. She delves completely into a difficult subject that, you would think, is too dark and deep for someone her age. Take that, Dakota!

“The minute you see Elle, you love Elle. So I saw Elle, and I loved Elle,” coos Huffman about her young costar. “Daniel [Barnz] did a smart thing of shooting the intense scenes near the end of the whole process, so we had so many days of playing cards and doing this and doing that. Life really was an improvisation.”

“She has this real sense of inner light,” continues Barnz about Fanning. “She has this innate sense of hopefulness and optimism. Every day was a continued revelation. She never had a bad day.”

However easy Fanning makes it look, Huffman admits that portraying the mother of a child with a disability brought difficulty and (surprise) more fear.

“When you live with a certain set of circumstances for 10, 12, 14 hours, you tend to carry them home with you. With [her character, Hillary], I was more frightened than I usually am, and I’m pretty frightened all the time. I carried a lot of fear around with me.”

The moral of Barnz’s cinematic work of reali-fantasy? Barnz says he wants to portray a child “battling conformity and breaking rules,” but Huffman has another theory.

“When your children are special and unique, it comes with its own set of challenges, possibly pain and possibly loneliness. So it’s that conundrum. The world says, ‘Be the same! Be the same!’ You have to say ‘No, no, no. She’s a special flower.’”