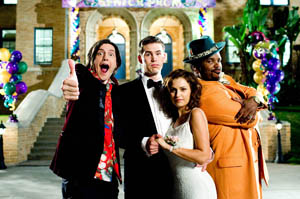 Zach Cregger and Trevor Moore, the creative guys behind “The Whitest Kids U’Know” comedy sketch on the IFC channel, bring you Miss March, with a sexy, fun Playboy bunny theme. Many of the cast members compare the film to an updated American Pie.

Sara Jean Underwood, 2007 Playmate of the Year, and a featured player in the film, states, “Sex sells, and Playboy is a definite attention grabber. People aren’t afraid to push the envelope. Zach and Trevor did it, Hef did it ... the film will reach and entertain audiences for its shock value and non-conformist style!”

Both Underwood and Raquel Alessi, the other female lead (playing Cindi, a goodie goodie “dork” in high school who later becomes a Playboy centerfold herself), considered Zach and Trevor their “buddies” throughout the filming process.

“They treated me like a friend, never a sex object, and cared about my opinions on scenes and dialogue,” says Alessi.

Cregger and Moore had a similar goal for their film: “Not to make it seem oversexed, offensive or mean-spirited, but rather surefire, non-stop fun and excitement!”

One enticing draw of the film is an inside, intimate look at the goings-on in the world-renowned Playboy Mansion, complete with the playmates, grottos and Hugh Hefner himself! Although the original intent was not to involve the authentic Playboy, fearing some restrictions on creative freedom, in the end, it was more credible to film at the actual mansion, with genuine (rather than fake) personalities involved in the production.

After a test screening, the two directors decided to change an original theme – at first, Moore’s character hits on an older Playmate. When the scenario was revised, Underwood, in her 20s, auditioned and her cute, bubbly, fun persona landed her the role.

Underwood has some scene-stealing moments in the film, as she holds her adorable dog, Puddles, and Tucker (Moore) flirts with her, brings her a drink, wins her over and takes her dog for all the other girls to gush over.

Alessi, a cute, loveable, talented actress (the younger version of Eva Mendes in Ghost Rider), describes her character Cindi as “an all American sweet innocent high school girl who wants to have sex with her boyfriend Eugene [Cregger] on prom night.”

But, things happen, and Eugene falls into a coma for four years. Life goes on, and Cindi ends up modeling for Playboy and generously footing Eugene’s medical bills.

Alessi’s agent found her to be “perfect for the role” and arranged an audition, and “that’s how it all happened.” Alessi rose to the challenge of making her character, as she says, a “more dimensional woman, with many hats – a girlfriend, daughter, playmate, not a tart or some kind of loose girl.”

She herself once posed for Maxim and found the opportunity a chance for her to have some fun, and one of the many different stepping stones to a nice career. Her personal favorite celebrity role model is Sarah Jessica Parker, who she describes, as a super talented actress in both comedic and serious dramedy roles.

“She’s got integrity,” Alessi says, “keeps true to herself and won’t take her clothes off on camera, keeping limits and boundaries intact.”

Alessi and Underwood both agree that despite the film’s external raunchiness and distasteful jokes for shock value, they are determined not to get caught up in the sex symbol, pin-up stereotype.

As Hugh Hefner states in the film, “There’s an inner bunny in every woman!”