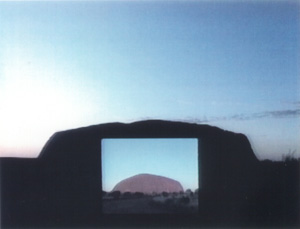 Ayers Rock from Takahiko Iimura’s A Rock in the Light.

If you’ve never heard of Takahiko Iimura, it’s time to change that.

The Japanese experimental filmmaker is one of the medium’s trans-Pacific pioneers and through a 10-day, citywide, multi-venue retrospective of his most influential shorts, his infinite influence on cinema will be explored. Although the events started last week, there are still five days of screenings across the greater L.A. area, all of which Iimura will be attending.

Inspired by both early-century French Surrealists and the underground film movement here in America, Iimura started messing around with the camera in the 1960s and, as Japan’s lone avant-garde filmmaker at the time, his work toyed with notions of sexuality, absurdism, abstractism and “taboo-breaking joyousness.” Today, Iimura still presses boundaries by combining film, digital text and computer graphics with his already forward thinking.

Today, UC Irvine will play host to two programs of shorts, one matinee (featuring works from the ’80s) and one evening (of early conceptual videos and “Film Poem” excerpts). And tomorrow, USC is conducting an afternoon workshop and presentation with the man himself followed by a screening of works from the late ’60s and early ’70s.

On Sunday, organizers LA Filmforum will host an evening of Iimura’s more recent works at the Egyptian Theatre. And Monday at REDCAT, his explorations of time in film will be screened.

Part home movie and part art projects, Iimura’s powerful shorts are not only experiments with form, but also attempts at modifying the film itself. With titles like This Is A Camera Which Shoots This and One Frame Duration, the highly influential filmmaker’s unprecedented retrospective is sure to inspire old and new fans alike.