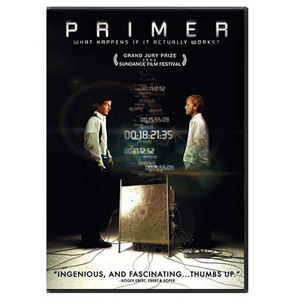 Yes, Netflix is convenient. They have a wide selection, and you can be lazy about when you get around to watching/returning.

But isn’t it great to have stores with an even better selection to browse, where you can pick the brains of the movie geek staff? Be thankful that you live in a city that has these valuable resources and get out and support them, because they won’t be around if you don’t.

If you’re digging the time traveling storyline on this season of “Lost,” check out this micro-budget Sundance film from writer/director/producer/star Shane Carruth. Two inventor friends accidentally build a time machine. It may be the most intelligent, provocative time travel movie ever made.

Vidiots (302 Pico Blvd., Santa Monica): Arguably the greatest selection in Los Angeles, with plenty of hard-to-find titles – many that have never been released on DVD.

CineFile (11280 Santa Monica Blvd., West Los Angeles): With a great location, next door to the Nuart Theatre, it features some of the most idiosyncratic genre sections of any video store. Plus, some great T-shirts featuring the names of director’s done in band logos.

Classic/obscure/overlooked films to catch at your local video store:

You may have recognized the actor playing George Bush’s minister in W. – then again you might not have. It’s none other than Stacey Keach, a criminally underappreciated actor and star of these two neglected classics.

Keach stars alongside a young Jeff Bridges as two down on their luck boxers in Fat City, directed by John Huston. The Ninth Configuration is a black comedy set in an abandoned castle, which serves as an insane asylum for Vietnam veterans. The humor eventually gives way, revealing an existential thriller underneath – a one-of-a-kind film from the author of The Exorcist.

Mickey Rourke is everybody’s favorite comeback story this year. Check him out in his heyday. Angel Heart is an atmospheric metaphysical mystery masquerading as a noir, set against the backdrop of New Orleans voodoo culture. It co-stars Robert De Niro and Lisa Bonet.

Where The Buffalo Roam

What Just Happened wasn’t producer Art Linson’s first foray into the creative end of filmmaking. He directed this Hunter S. Thompson comedy, which stars Bill Murray as the legendary gonzo journalist and Peter Boyle as his lawyer (loosely based on Oscar Zeta Acosta, the real life Dr. Gonzo).

Not too excited for yet another re-tooling of a stale franchise (i.e. Friday the 13th)? Check out Peter Bogdanovich’s first film, Targets, which is still shocking and timely, exploring the meaning of horror in the modern world.

You can feel the vibrancy of a young filmmaker at work, turning what began as a Roger Corman schlock work into art. Watch the extra features for the full story!

Recently deceased actor Patrick McGoohan, king of the 1960s British spy genre, was the brains and face behind this trippy series. McGoohan is a special agent who upon resigning is taken prisoner, awakening in a creepily idyllic village full of brainwashed prisoners where everyone is a number.