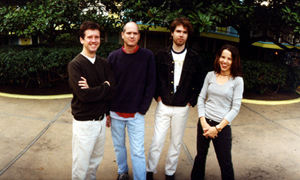 The Return of Superchunk

It’s been a long time since we last heard from beloved DIY darlings Superchunk; 2001 to be exact. The group is preparing material for a new album, but in the meantime they’re releasing a sort of odds-and-sods EP called Leaves in the Gutter.

Singer Mac McCaughan explains, “Some of these songs are newer than others, but we kind of felt like if we’re going to get to work on a new album we need to clear the decks of these songs first. A couple of them I really like, but they already feel like they’re from another era and wouldn’t fit on a new album anyway.”

The five-song EP contains two versions of “Learned to Surf,” and you may hear the song live when Superchunk plays Coachella April 18. Leaves in the Gutter will be available for you to listen to as you drive to Indio; it drops on April 7 through Merge Records.

Def Jam Records is turning 25 this year, and after a quarter century of turning out hits from the likes of L.L. Cool J, Slick Rick, Rihanna, Kanye West, Jay-Z and Young Jeezy, the label is not about to sit back and rest on its laurels.

“From a personal standpoint I can say that Def Jam had tremendous meaning and significance in my own career as a musician, producer and independent label head, long before I actually arrived at these offices five years ago. Let’s celebrate the next 25 years of Def Jam right now!”

A deluxe four-LP set called Def Jam 25 will get the party started. Def Jam 25 Vol. 1: DJ Bring That Back (2008-1997) will feature a dozen cuts from artists like Foxy Brown, Ludacris, DMX and Ashanti while Vol. 2 (1996-1984) will dig out golden oldies from Public Enemy, Redman, 3rd Bass and Oran Juice Jones. The limited-edition vinyl drops April 18 in conjunction with Record Store Day.

If you’ve ever watched the CBS comedy “Gary Unmarried,” you’ve heard the music of Kingsize; that’s them playing the opening theme. But the L.A.-based quartet has a kit bag that’s, well, king size and they’re about to release not one but two six-song EPs. A single called “Miss America” has been pulled from The Good Fight, and Alison Eastwood, Clint’s daughter, has been tapped to shoot a video for “Rabbits” from the other EP, The Bad Night. Kingsize lead singer Jason Thomas Gordon has a vocal style that reminds of Tom Petty, and the band rocks like the Heartbreakers too.

Gordon says that making a big-sounding record was the idea.

“These are desperate times and all local music can muster is a whimper? I want to shout it from the rooftops!”

Both Kingsize EPs drop March 24, and if you want to keep up with the band you’d better get them right away – they’re almost ready with a follow-up album.

Taryn Manning is just a little bit busy. She’s promoting the summer collection of her clothing line Born Uniqorn, working on a couple of films and developing a TV show based around the clothing line and her music career. That music career of course includes the urban-flavored pop that she makes with her brother Kellin as Boomkat. Watch for the L.A. duo’s latest release A Million Trillion Stars March 10.