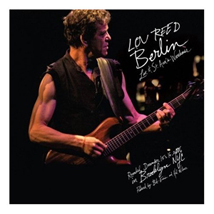 Long time fans of the often-sullen Mr. Reed know that his personal depression and frustration played out in grand fashion in his 1973 recording, Berlin. Loosely summarized the album tells the story of a couple of speed freaks trying to hold it together through all the horrors that come with a serious drug dependency – physical abuse, sexual depravity and attempted suicide among them.

The song cycle touched a nerve with critics who to this day proclaim Berlin to be Reed’s finest work. Reed however, was so emotionally wracked when he wrote the songs that for years he refused to have anything to do with them and never performed any of Berlin’s songs live until this show in 2006 where he played the album in order and in its entirety.

The live recording begins pretty much the same way as the studio version with Reed sounding heartbroken as he sings the title song over a piano piece that emphasizes the sadness. From there on though things are different; Reed’s vocals seem to relish the brokenness he portrays in songs like “How Do You Think it Feels” and “Men of Good Fortune,” and he gives himself extra space (and volume) with his guitar playing.

This recording packs a bigger punch than the original not just because it is live, but also because of Reed’s much healthier mindset. Before he was miserable and singing about misery; here he’s clearly having a blast.