BECKHAM SITUATION HAS A RESOLUTION: Soccer star will return to L.A. in July. 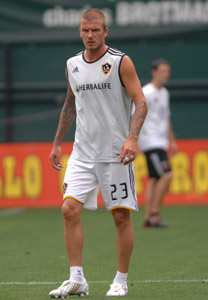 David Beckham is coming back in mid-July, but only for the rest of the season.
(Credit: Chuck Myers/MCT)

Soccer player David Beckham will stay, return and then leave.

Although the deal has not been finalized, AC Milan, Galaxy, MLS and Beckham have agreed on negotiations that would allow him to stay in Milan until the season ends (June), then come back to Los Angeles to finish the campaign and then buyout his contract to leave and sign elsewhere or simply rejoin AC Milan.

Beckham, 33, has long desired to stay with AC Milan, and this would allow him to compete for a starting role with England’s national team. Coach Fabio Capello has stated several times that if Beckham wants to be considered as a roster player, he must play at a high level.

The English superstar is scheduled to return with the Galaxy in mid-July. He will then exercise the buyout clause in his five-year, $32.5 million contract with MLS. Beckham will play in at least 13 matches before leaving the Galaxy, which will depend on them gaining a postseason birth.

His first game with L.A. would be when the team travels to New York to face the Red Bulls July 18. His first home game would be August 15 when the team entertains the Seattle Sounders FC at the Home Depot Center.

How will Galaxy fans react when his name is called out in the starting lineup?