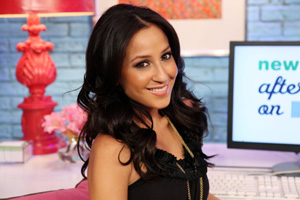 Growing up as part of the MTV generation, Adrienne Bailon is more than thrilled to be the fresh new face of MTV, hosting afternoon shows “Sex…with Mom and Dad,” “Room Raiders” and “Parental Control” and various specials promoting current and up-and-coming musical artists.

A former Cheetah Girl, and quite involved in the musical world for many years, Bailon feels right at home in her latest gig and is honored to welcome celeb guests on her program, with whom she has a natural rapport and friendly banter.

Describing a recent segment on her show, Bailon says, “Ciara came in to promote her new album, Fantasy Ride [available April 7], and also her music video with Justin Timberlake. She added insights on the program, ‘Sex…with Mom and Dad,’ explaining how important open communication is for teens and parents in today’s world.”

Bailon is loving this stage of her career, and reminisces on her own youth: “Being a part of the whole MTV generation, it’s such an honor doing what I do. I grew up watching the show, leaving school early some days to catch ‘TRL’ in Times Square with all the fans and posters outside, and hoping to get picked for a spot on the show!”

Now, in the limelight herself, Bailon loves meeting fans, both in person and interactively via Web cam.

Bailon’s personal faves include Beyoncé and Kanye West. Being a part of this industry has always been a dream of hers.

Through hard work, motivation, wonderful internships and being at the right place at the right time, Adrienne Bailon is now living her own dream.