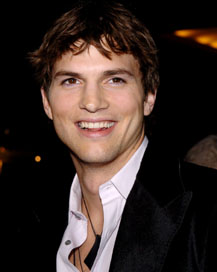 Ashton Kutcher says he doesn’t get paid to act. He gets paid to sell.

“They don’t have to pay me to do these movies,” the actor says following lunch in his Los Angeles hotel suite. “The reason they pay me is to endorse the movie. And I only endorse movies that I believe in.

“I’m not going to lie to my audience. I thought Dude, Where’s My Car? was a fun buddy movie and that’s how I sold it. When I did Just Married, I sold it as a romantic comedy because I believed it was an entertaining romantic comedy. But when My Boss’s Daughter came out, I went on exactly two talk shows because I had to.

“If you don’t see me promoting the heck out of a movie, don’t go see it.”

No problem figuring out how Kutcher feels about Guess Who, the comic remake of the 1967 classic Guess Who’s Coming to Dinner?

In fact, the 27-year-old actor can’t stop selling this movie, which opened March 25.

The racial roles have been reversed from the original, with Kutcher (who is white) meeting the parents (Bernie Mac and Judith Scott) of his black girlfriend (Zoe Saldana). Racial hilarity ensues.

For Kutcher, the comedy marks a return to his comic roots after his recent foray into drama (The Butterfly Effect). He has another comedy, A Lot Like Love, opening this month, and this is his seventh and final season on the Fox-TV comedy “That ’70s Show.” He is in the third season of “Punk’d,” his celebrity prankster series on MTV.

The son of factory workers (his dad worked in a Cheerios plant and his mother in a plant that made Head & Shoulders shampoo), Kutcher was born in Cedar Rapids, Iowa, but the family moved to an 80-acre farm in nearby Homestead when Kutcher and his twin brother were 13.

After high school, the future actor attended the University of Iowa as a biochemical engineering major for one year, dropping out after winning a modeling contest in a shopping mall. First prize was a trip to New York City, where he signed with an agent and began modeling for the likes of Calvin Klein and Gucci.

He appeared in an NYU student film, which led to an unsuccessful audition for the film Varsity Blues, in which he lost out to James Van Der Beek. But he was offered a trip to Los Angeles to audition for an NBC series, which he didn’t get. However, on the same day, he was cast in “That ’70s Show.”

A few years later, he met Demi Moore at a dinner in New York City, where he was hosting “Saturday Night Live,” and the rest, as they say, is paparazzi history.

Would it be wrong to assume that your friendship with Sean “P. Diddy” Combs had something to do with you wanting to make this movie?

No, you’re right. Very much so. Our friendship has helped me become aware of the fact that people are becoming comfortable with something that’s still very uncomfortable.

When I was hanging out with Sean, people did not understand why this Iowa farm kid went out with this hip-hop mogul from New York. But it wasn’t that he was a hip-hop mogul and I was a farm kid; it was because he was black and I was white. It was that simple. If he was a white hip-hop artist from New York, nobody would have noticed.

People just aren’t comfortable with it yet. That’s why the movie needed to be made. If I’m not part of the solution, I’m part of the problem.

Is this the first time that you realized that there might be a problem with race in this country?

It’s all about the influences around you. As soon as I stepped outside my world and inside his (Combs) world, I understood how bad the problem was.

Did you think that a comic remake of a classic drama about race was the way to go?

That was the whole point. If you can laugh at something, then it’s OK. There’s that scene in the movie when I’m telling black jokes, which makes everybody uncomfortable. When jokes like that don’t make people uncomfortable, we’ll have made some progress.

Were you concerned at all that it might be considered sacrilegious to remake Guess Who’s Coming to Dinner? as a comedy?

I respect the original movie. I respect Sidney Poitier. I respect Katharine Hepburn. I respect Spencer Tracy. And I always promised myself that I’d never remake a great movie because it’s already great. But I was curious whether we could do it in such a different way and still carry the heart and soul of the original. I think we did it without disrespecting the original in any way.

Have you ever been in a situation where you were dating somebody’s daughter and you weren’t the right race?

I have dated interracially, and I’ve met the parents of many girlfriends. I’ve felt the stares of people.

Forget about race; what about meeting any girl’s father?

That’s never fun. You just want to impress the guy, and you usually make a buffoon out of yourself. The truth is that if you just be yourself, you’ll be fine.

Interviews
Mary McNamara: After losing a child, 'Pieces of a Woman' filmmakers channeled their grief into art
377 views

Interviews
Ai Weiwei on activism in the US, his art response to COVID-19 and a secret Wuhan film
991 views