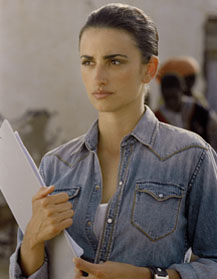 Most U.S. audiences were introduced to Penelope Cruz in 2001, when she got “all kinds of crazy” opposite Johnny Depp in Ted Demme’s Blow and, almost simultaneously, starred alongside Tom Cruise in Cameron Crowe’s mind-bending film, Vanilla Sky.

However, what these audiences may not know, is that Cruz – who currently stars in Sahara, opening nationwide on April 8 – got her start as an actress in her native Spain when she was just a teenager. In fact, even her role in Sky was a reprisal of the part she played in 1997’s Abre los Ojos, the film from which Crowe’s project was initially adapted.

Although Cruz – whose previous credits also include All the Pretty Horses, Captain Corelli’s Mandolin and All About My Mother – could easily rely on her sheer beauty to secure roles, the actress, who turns 31 this month, eschews any preconceptions that she’s just another ingénue phoning in her performances to cash in on her genetic blessings.

“Have you seen Don’t Move?” Cruz asks rhetorically. “I don’t care if I have to appear ugly for [a role]. If you’re afraid of that, then you [won’t] look for the heart of the character, the soul of the character. That’s why I’m an actress – to play different people. I don’t want to be the same thing twice.”

Cruz gets her wish with her latest role in Sahara. Directed by Breck Eisner, the film – an adaptation of the popular Clive Cussler adventure novels – follows the exploits of Dirk Pitt (Matthew McConaughey) and his best bud Al (Steve Zahn), who are out in search of a Civil War Ironclad buried deep in the Sahara desert.

While out on their treasure hunt, Dirk and Al cross paths with Dr. Eva Rojas (Cruz) – a whip-smart physician working for the World Health Organization – in search of the source of a deadly disease outbreak that threatens to erupt into an irrevocable pandemic if not contained.

“I’d always wanted to do an action-adventure before but I never found the right thing,” says the film’s leading lady. “Or I felt like the director attached wasn’t good enough.”

“The (Sahara) script was great,” she continues. “It was smart and funny and the character, the role of the woman is strong – she was there for a reason. I loved that.”

Cruz, who plays a wily doctor in Sahara is a rarity in the testosterone-laden action/adventure genre, goes on to reveal where her sources of professional inspiration actually lie.

“Susan Sarandon is so amazing,” Cruz continues. “That’s the thing – they’re always themselves. So sexy, so attractive and so special.”

Judging by her outlook and opinions on what seems to be a very appearance-obsessed industry, it’s interesting to hear exactly what the actress plans to do with herself in both the near and distant futures.

“My grandmother had so many wrinkles; I think every wrinkle tells your story. I want to spend every year of my life for what it is,” says Cruz. “You can be 50 and want to do a little tuck. It can look great, but I don’t know what I will do in the future. I have no idea. I don’t judge the people who do it, but I don’t like all of the talking about age.

When women complain [about their looks], says Cruz, “they make it an issue when it’s not. I’m never going to fall into that trap. I plan on working when I’m 80 and, when I’m 80, I want to look into the mirror and see an 80-year-old woman,” Cruz continues with a laugh. “That’s something that I learned from the women in my family. That’s the way I want to be.”