IMPROVING THE LUCK OF THE IRISH: (Does luck even exist?) 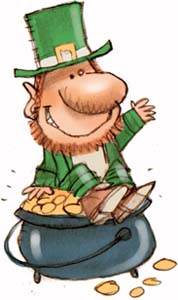 There are many different kinds of luck. Some believe in it, others do not. Some say it is when preparation meets opportunity; others say it’s random and unpredictable.

In either case, there begs one formidable question: Can you improve your luck? With St. Patrick’s Day rapidly approaching, many people begin to ponder their luck.

In order to improve your luck it is important to understand first what luck is. While people around the world constantly change their beliefs of luck per their current statuses and experiences, luck becomes more of a perception than an act or instance.

For example, an old Irish saying reads, “I complained I had no shoes until I met a man with no feet.” This expression is a perfect example, because although nothing happened to improve the person’s overall standing (an act of luck), the person feels lucky because he has been blessed with something that another person lacks (a perception of luck).

With this definition, some believe luck as a perception can be improved. Thomas Jefferson once said, “I find with the harder I work, the more luck I tend to have.” This parallels the idea about preparation meeting opportunity.

In the book The Secret by Rhonda Byrne, quantum physicists and philosophers appoint people’s thoughts and attitudes as the determinants of their “luck” and defend this by arguing that every thought emits a frequency that attracts congruent frequencies to it, therefore drawing what the people want to them, making them “lucky” by attaining what they desire.

In this sense, people absolutely can control and improve their luck by controlling their thoughts. What the people who believe in luck and the ability to improve it have is a positive perception of the ideas of probability and fact.

This alone may not undoubtedly improve their probabilities in reaching certain goals or successes, but it sure makes them feel more positive about it. And in more cases that not, that positivity breeds more effort (and possible attempts), which would effectively increase the person’s probability of becoming “lucky.”