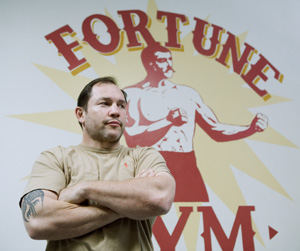 Those are some words describing and identifying Justin Fortune, owner of Fortune Gym in Los Angeles.

“The gym was established a year ago,” Fortune says. “It took about two months to get it started.”

Fortune, who fought professionally for over 20 years, is a former heavyweight contender who once fought against Lennox Lewis. He has trained numerous fighters, including Mike Tyson, Manny Pacquiao, Israel Vásquez, James Toney, Brian Viloria and Johnny Bredahl.

“I’ve helped them train a lot. I also know them very well as friends,” Fortune says. “I am the current trainer of four mixed martial arts fighters and six boxers. That’s a lot, but I hope that in the future I have more.”

“I trained Mike [Tyson] like three fights ago. He is a good guy,” he says. “I was involved with Pacquiao about a year and a half ago. I made him work hard like in the old days.”

What Fortune, 43, implements as a priority in the training and preparation towards a fight is the desire and strategy to remain traditional. Fortune retains the techniques from the old days, making the fighters work hard on strength and conditioning.

“I train fighters in the mornings and the evenings,” Fortune says. “It is intense training.”

Jason Urbisci, one of two managers at the gym and a trainer, describes Fortune as the see fu, which means master and/or teacher.

The gym itself has several functions. It is in the process of developing a stable of fighters in both boxing and mixed martial arts. However, there are other individuals who use the gym personally to get into and stay in shape.

Although the gym flourishes through its professional fighters and those who wish to train as fighters, Fortune welcomes anyone who carries the desire of working hard. Fortune, who used to own a restaurant in Australia and is also a chef, provides original strength and conditioning techniques of upper and lower body plyometrics, core training and sandbag workouts.

Stars have and still use the gym: James Franco, Mario Lopez and Frank Stallone are among them.

“People come in because they like the environment,” Fortune says.

Most fighting contenders who frequent the gym have some type of amateur background. Some even have an intense resume, such as Canadian Joel Mills.

Fortune trains Mills, who has a 5-3-1 record with one knockout. Mills, 21, is scheduled to fight on March 21 at the Playboy Mansion.

“I’ve got about 40 people coming out,” Mills says. “This is the second time I will fight at the Playboy Mansion. It is a good experience. It is four rounds.”

Asked about the preparation, he says, “Everyday I come into the gym and work out for two-to-four hours. As far as I am concerned, Justin is the best trainer in the world.”