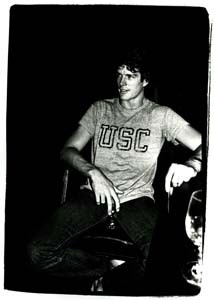 “I love Los Angeles. I love Hollywood. They’re beautiful. Everybody’s plastic, but I love plastic. I want to be plastic.” —Andy Warhol

It’s a good thing Warhol loved Los Angeles because the 100,000 black and white photographs he managed to collect as a type of “journalistic-diary” is in a new exhibition called Looking Into Andy Warhol’s Photographic Practice.

And, if Warhol loved plastic … all of the photographs (Polaroids, gelatin silver prints and photo booth strips) that were chosen to be on display are as shiny as plastic.

Warhol would be very proud, not that the artist ever acknowledged the importance of his work. As an artist, Warhol seemed to simply enjoy cataloging life.

He included all forms of life in his art, from the people around him, like Bianca Jagger and Georgia O’Keefe, to the inanimate objects surrounding him. The Campbell Soup can is now infamous, but a lucky pair of shoes gets to join in on the fun in this new exhibit.

Warhol also used his art to comment on society. He was one of the first to use several mediums all at once, which is now simply called “mixed media.” Some would think Warhol was a bit of an unknowing prophet.

One example of how Warhol was prophetic is the existence of this exhibit. Warhol saw photography as a new form of art, at the same time as his more respected contemporary, Robert Mapplethorpe.

In addition, Warhol was the first to combine “high” art and corporate objects, creating something new … a highly profitable and mainstream form of easily obtainable “art.” This new form of art survives in the consumer culture of today, where the exclusive mystique of the rich and high-class art world no longer exists in the form it did before Warhol – when no one could pass by the velvet ropes except for the blue bloods and the über-chic.