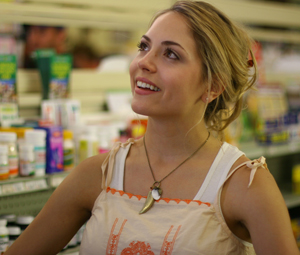 With summer fast approaching, young people the world over are gearing up to embark on life’s little adventures. After all, you only live once.

But what happens when you’re not necessarily gifted with a natural wanderlust? That’s the dilemma that sets the action into motion in the new film Sherman’s Way.

Actor-producer Michael Shulman (“Party of Five”) stars as Sherman, an uptight Yale law student who misinterprets his girlfriend’s (Lacey Chabert) suggestion that he open up and be a bit more adventurous. Sherman soon finds himself on the road with an eccentric former Olympian named Palmer (played by James LeGros).

Sherman’s been cut off financially from his moneybags mother and loses his calm while riding shotgun with his new partner in crime. However, he soon encounters a promising light at the end of a rather uncertain tunnel with the introduction of Addy into his life.

She comes along, packing all the beauty, coolness and sarcasm a young man at a personal turning point could hope for. That’s one of the things that attracted actress Brooke Nevin to her character.

“Addy is this free spirit who’s traveled the world and has the sense of adventure, quirky acquired talents and old-soul wisdom to show for it,” she says of her role. “And she’s all that more of a curiosity for having settled down in this charming, small town where Sherman has found himself stranded.”

Nevin has had a long and impressive career packed into her 26 years. She has appeared in numerous projects in her native Canada, as well as making a splash on the Hollywood scene. But it’s her work in Sherman’s Way that has been capturing a ton of attention.

“I seem to be partial to playing the type of girls who, in some way, awaken an unknown quality in others – the catalyst as opposed to the hero,” explains the actress. “I realize that is a really broad theme, but it is a connecting one in a lot of the characters I’ve played, and it’s something I’ve enjoyed re-inhabiting in different ways.”

Part of the freedom she enjoyed in crafting such an openhearted portrayal came from working with director Craig Saavedra. For Nevin, he’s the best show runner any performer could ever hope for.

“How do you describe a man who has the madcap sensibilities of Billy Wilder, the vision of a young Orson Welles and the technical savvy of Steven Spielberg in his prime? Two words: Craig Saavedra,” she proclaims.

Working with television and indie film greats like Enrico Colantoni, who plays an eccentric former top chef named DJ as well as LeGros was also a huge plus for Nevin.

“I gleaned advice from just watching the two of them on set. James and Enrico are both such talented actors, and fully committed to the characters they create,” she says. “Their willingness to play encouraged greater freedom in me as Addy.”

That fun and excitement extended off camera as well. The actress recounts one of her favorite days of shooting the comedy and the joy that it brought her in working with her co-stars.

“My favorite scene to shoot was one in which Addy is enthusiastically feeding Sherman Peking John’s hot and spicy shrimp. [Saavedra] encouraged me to stuff as many as possible into Michael’s mouth – so I did. And it was an unexpected amount of fun, for both [Saavedra] and I. That Shulman can handle his shrimp. I really hope Michael doesn’t take that the wrong way,” she jokes.

Interviews
James Bond producer: 007 ‘can be of any color’ but never a woman
159 views