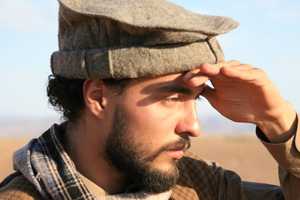 “No second guesses. The objective is now all that matters.”

That is what Special Agent Benjamin Keynes said to himself when he stepped off the chopper dropping him and a group of six Special Operation soldiers in the middle of a desert in Afghanistan. Dispatched under the pretense to locate an influential Muslim clerk, the group soon finds itself in a bizarre situation.

Trapped in what the director calls “the Middle East Bermuda Triangle,” the soldiers and their local guide, Abdul (Chems-Eddine Zinoune), are faced with events that human logic fails to explain: weird bright lights in the sky, triangle-shaped signs all over the mountains, missing corpses and completely disintegrated bodies, fighter ghosts, a rescue chopper that’s there, only not seen, and then somehow disappears into thin air, and water that turns into sand. Is it a curse and work of God for entering sacred grounds, or is it simply a UFO and aliens stopping by to say hello to their neighbors?

Narrated by Agent Keynes (Jonas Ball), the movie has a surreal feel to it. The same can be said about Jonas Ball’s (The Killing of John Lennon) acting skills. For an actor playing the lead role, he does not seem able to convey to the viewers the dire situation these men are in. Then again, maybe his detached and cold narration and his lack of proper emotional cues are part of his role.

Written and directed by Daniel Myrick, better known as the guy who ruined sleeping outdoors for many prospective campers with The Blair Witch Project, The Objective creates feelings of unease in the viewer. As the movie progresses, questions tend to pile up: What will happen? Who will survive? And what is it about Americans that makes them poke their heads in every dark hole they find? Most important, what is the ending supposed to be, and what is the message Myrick is trying to pass on? Is this supposed to be metaphor for soldiers who went on to fight evil but never returned, disappearing under piles of dirt? Is he trying to alienate Americans from Afghan and Muslim cultures?

Perhaps, he simply wanted to scare the would-be U.S. soldiers from ever entering Afghanistan. However, one thing is for certain; no undead Taliban zombies or genetically mutilated creatures can be held responsible.