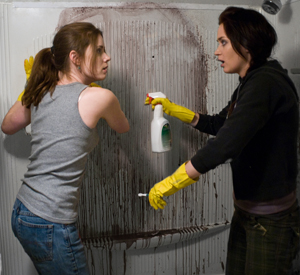 Rose toils day after day as a housekeeper while trying to maintain any semblance of sanity when dealing with her gifted but unruly son, Oscar, her get-rich-quick scheming father (played by a slightly typecast Alan Arkin) and her flighty sister, Norah (Emily Blunt). She’s also knee-deep in a going-nowhere romance with a married police detective named Mac (Steve Zahn) – who happens to be her boyfriend from back in the day.

Mac suggests that Rose go into business for herself cleaning up crime scenes. She initially balks at the idea – that is, until Oscar is kicked out of school for poor behavior, and she is forced to enroll him in a pricey private school.

Rose enlists Norah, and they set out to form Sunshine Cleaning. Each job delivers a new emotional awakening for the sisters.

While clearing out the site of a suicide, Norah discovers photographs belonging to the victim. She seeks to find the woman in the pictures. That quest – fueled by personal experience – guides her into a touching friendship with Lynn (Mary Lynn Rajskub of “24”).

During this time, Rose lands smack-dab into an ill-fated reunion with her former high school cronies. However, she receives kindness and assistance from an industrial cleaning materials vendor named Winston (played by Clifton Collins Jr.), in what could be the best display of sexual tension to hit theaters in a long while.

What’s so great about Sunshine Cleaning is that it’s not competing to be the feel-good movie of the year. Rose is flawed and deals with the same issues of self-worth and acceptance that anyone would in real life. Her problems and frustrations don’t get an annoying, glossy Hollywood topcoat; they are things that you, as a bystander, know she will have to fight with and grow to overcome. To her credit, she’s all the more lovable because of it.

Blunt is equally fantastic as Norah. Instead of losing herself in the elegance of her English pedigree, the actress absorbs the snarky personality of this small town American slacker flawlessly.

Each of the actors in Sunshine Cleaning has outstanding onscreen chemistry with one another and does a jaw-dropping good job bringing first-time screenwriter Megan Holley’s funny, but powerful words to the big screen.