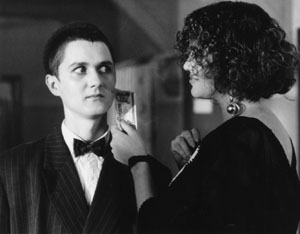 For the majority of postmodern history a massive concrete wall separated East and West Berlin as a physical barricade of ideological proportions and a symbol of the iron curtain that fell over Europe during the Cold War. Built by the Soviet-run German Democratic Republic in 1961, the barrier was meant to keep East Germans from escaping into the ally-dominated West, and for 25 years, that’s exactly what it did.

But 20 years ago, the government changed their minds and citizens were allowed to move freely between the two sides; the wall was slowly chipped away and reunification – or Die Wende – began.

The artistic significance of this time is not to be understated, and a spring semester-long program of citywide German cultural events is proving it. Centered around LACMA’s Art of Two Germanys/Cold War Cultures exhibition, the Wende Museum, the DEFA Film Library at the University of Massachusetts Amherst, the Goethe Institute, Hammer Museum and UCLA Library have collaborated to present a series of 14 films made by East German filmmakers during the fall of the wall.

Aptly-titled Wende Flicks: Last Films From East Germany, the series highlights 10 feature films and four documentaries made between 1988 and 1994 and finishes off this week with screenings of The Wall (Die Mauer) and Miraculi at the Hammer and Goethe-Institut, respectively.

A brainchild of filmmaker-painter Jürgen Böttcher and cinematographer Thomas Plenert, The Wall is an interview-free documentary filmed as the wall was coming down, while Miraculi, based on a true story, follows a group of pre-unification punks on a unique journey through East Berlin.