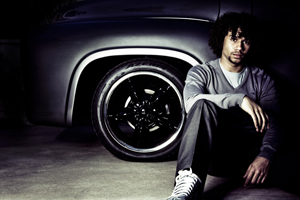 For child stars, the road to adult fame is littered with the bodies of fallen compatriots who couldn’t make the transition. From Haley Joel Osment to Candace Cameron, Debbie Gibson to Jonathan Taylor Thomas, these days you’re most likely to find a former tween dream on some VH1 show about rehab or has-beens and the carnage stretches back to Hollywood’s silent era.

Only time will tell if the Jonas Brothers, Miley Cyrus and their cohorts go the way of Jodie Foster or David Cassidy, but presently all eyes are on the stars of “High School Musical.”

In October, the cast, now megastars thanks to the franchise, bowed in their final appearance as Wildcats and Corbin Bleu, who starred as Chad, Zac Efron’s basketball obsessed best friend, has jumped out of Disney’s nest, wings outstretched.

His new album Speed of Light arrives in stores March 10 and fans expecting easy listening, Disney bubblegum pop are in for a surprise.

Bleu’s album, which he says was influenced heavily by Earth, Wind & Fire, Michael Jackson and Prince, is a major departure from the jazz-hands-brand musical theater that built his fan base.

When asked about his more mature sound, he replies giddily, “I worked really hard on that so, thank you! Mission accomplished.”

Bleu isn’t concerned about alienating his supporters because he understands that he’s not alone in his development.

“I think anybody who starts off in a young genre in their art; Johnny Depp doing “21 Jump Street,” Will Smith and “The Fresh Prince of Bel-Air,” Justin Timberlake, Britney Spears, everybody makes a certain transition,” Bleu explains.

“Fans grow up,” he says emphatically. “They grow up and so do we. As long as you make that transition together, you can keep holding onto each other.”

Being slightly older and wiser came in handy when Bleu stepped into the studio to record Speed of Light. His 2007 debut album, Another Side, was an incredible opportunity he says but, more than anything, it offered him a learning curve so he was prepared when he returned for a second, more personal record also enabling him to be more hands on than he previously thought appropriate.

The first step Bleu took in creating an album that was precisely what he imagined involved hiring producers Eric Hudson and Brian Kennedy, both of whom have worked with Chris Brown, and writer Claude Kelly, whose credits include songs for Kelly Clarkson, Whitney Houston and Britney Spears, getting them all together and “just going into the studio, listening to music, talking and vibing,” Bleu says.

On one hand, the group needed to come to an understanding of what they wanted the feel of the album to be and slowly map out a course to get there but, more important to Bleu, he needed to know he was in an environment where he had true collaborators who could help create his most honest work to date.

“I wanted Speed of Light to be a lot more personal than my first record,” Bleu says. “I wanted to make it much more about me. When you start working with producers, you don’t know anything about each other and you could just go and make some music, but it’s not going to have that true heart vibe. When you record a song, you’re recording your soul onto that track.”