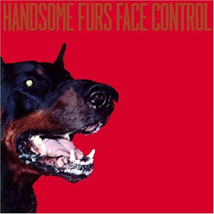 Hailing from the land of ice hockey and maple syrup, married couple and Canadian rock duo Handsome Furs channel their inner-Killers on their futuristic follow-up album Face Control. From songs like the cool, subdued “Evangeline” to the more up-beat and well-done “Officer of Hearts,” vocalist Dan Boeckner is seemingly drowned in synth-heavy, syncopated dance drones, complementing the robotic voicebox that never leaves his side.

Ironically, instead of offering “control,” his voice at times is sporadic and unexpected. While it is pleasant across most of the dance-y collection, the song “Nyet Spasiba” begins with an anxiously stated “darkness,” which from the first note, startles then loses the listener completely.

And though the electronic, interlocking technology present in their sound is modern and relevant, it is no longer original. Rather than facing control, the pair must face the music, which is at end, pretty average.


Face Control is currently available.
Article posted on 3/11/2009
This article has been viewed 1427 times.