Acceptance: Not Hiding Behind Smoke and Mirrors 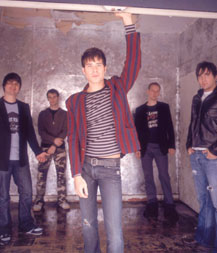 "Phantom – Function: noun. 1. Something (as a specter) apparent to sense but with no substantial existence 2. Something existing in appearance only," according to Merriam-Webster. So why is it that with their major label debut, Phantoms, the Seattle five-piece known as Acceptance have created their most honest, legitimate work yet?

For one, singer Jason Vena, guitarists Christian McAlhaney and Kaylan Cloyd, bassist Ryan Zwiefelhofer and drummer Nick Radovanovic have all done quite a bit of growing up since they released their 2003 EP Black Lines to Battlefields. Lineup shifts, one marriage, another engagement and, of course, the constantly evolving musical tastes that come with constantly evolving times have all led up to the release of Phantoms.

Garnering comparisons ranging from Coldplay to Jimmy Eat World to Third Eye Blind, Acceptance is aware of the media’s inability to place them in a genre or category despite their straightforward melodic rock sound.

"I’ve heard us compared to every band under the sun," says McAlhaney with a laugh, though he and his bandmates agree that that isn’t necessarily a bad thing.

"We’re getting to a place with this record where we’re hard to define," adds Vena.

Though the band is presenting a challenge to industry label-makers, the one constant among them is the "pop" tag, which McAlhaney and Vena also agree doesn’t necessarily have a negative connotation.

"We write rock songs that have hook melodies. So did Nirvana, so did U2," says Vena, explaining, "You just strive to do as much as you possibly can within the framework of who you are. That said, if Kanye West wanted to do a song with us, I would be there."

This oft-dreaded three letter word of rock has never really scared Acceptance, even now as they are precariously perched on the ledge of mainstream success, a stage when finding a niche seems so important to defining a band’s identity.

"It’s all about what’s behind your music. If it’s real, people get it," Vena says with confidence.

It would seem that this mantra holds true for the band, as more people seem to be "getting it." Anyone who has been to a recent Acceptance show will have seen fans singing along to the songs off Phantoms, with each verse memorized verbatim. Except these fans knew all the words four months before the album’s release, which is set for April 26.

With all the buzz and anticipation building about them, Acceptance appears to be primed to assume the mantle of "next big thing," but that’s very much the opposite of what they’re hoping for.

Indeed, being the "next big thing" is far too temporal a term for Acceptance. The band members are keenly aware of themselves and the power they have as musicians. In a genre currently obsessed with self-perpetuating depression, they’ve taken it upon themselves to be one of the few inspiring bands in rock.

On the lyrical content of Phantoms, Vena says, "It follows suit with what I’ve always tried to speak on; just wanting to put a message of hope out to people, but also to have them believe it."

With Phantoms, Vena and his band were set on making an album that all people could relate to and draw their own connections with, so they took a decidedly obscure approach to songwriting.

"There are really only two songs that are about actual relationships," says Vena. "[For] all of them, I sat down with a purpose. I wanted to tell a story of a whole bunch of things that worked together. I think if you have to look deeper into lyrics and you don’t get them right away, you can find something for yourself."

Acceptance has always been inclusive when it comes to a target audience, which has no doubt let them transcend the pitfalls of being pegged as a pop band, despite existing stigmas and misconceptions.

"I don’t think you exclude anybody. They may never think anything differently about you, or they may come to a show and get a different perspective. I’m not putting limits on what can happen," Vena says.

Retelling a specific event where Vena felt they were able to fulfill that self-set role, he says, "We got an e-mail from a kid who said he was contemplating killing himself, and the record made a difference for him. It was right then that I realized you really could do something to people."

"It’s easy to get detached – to go out and think about playing shows, becoming a huge rock band and all these things that don’t really matter, but luckily for us, you have situations like that that make you stop and say, ‘This is why we’re doing this,’" he adds.

Acceptance’s ability to connect with their fans and their fans’ reciprocating dedication has no doubt kept the band grounded, and will surely continue to as they take their next career step into the mainstream scene. As for those who know the band best can attest to, there is an understanding of what it means to be an artist in each of the members that goes far beyond the going-through-the-motions process that so many bands have adopted.

That’s why Acceptance really isn’t the next big thing in rock, regardless of what any other publications might tell you. They’re just the next real thing to happen to it.

Phantoms will be available April 26. Acceptance will be performing on April 20 at the House of Blues Anaheim and on April 21 at the Troubadour in West Hollywood with Copeland and Lovedrug. For more information, visit www.acceptancerock.com.