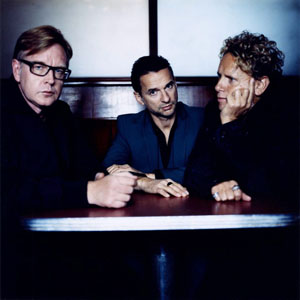 Depeche Mode’s Sounds of the Universe

The next Depeche Mode album is titled Sounds of the Universe, and it’ll drop in several different formats April 21. The band’s 12th studio album will be available in a regular CD package and as a corresponding digital download, but there are enhanced purchase options.

A special edition CD/DVD box set will be packed with exclusive material; the set’s three CDs will feature the album, bonus songs and remixes and 14 demo recordings, while the DVD will hold a documentary about the making of the album, a conversation with the band about their studio techniques and a short film featuring a track-by-track discussion of each song. Topping off the box set are two 84-page hardcover books; one features all of the album’s song lyrics and photography by Anton Corbijn, while the other will feature candid photography from various shutterbugs.

Sounds of the Universe will be a big deal at iTunes as well where a new service called iTunes Pass is debuting with the Depeche Mode release. Fans can purchase the Pass now for $18.99 and receive the album’s first single “Wrong” and the Black Light Odyssey dub remix of “Oh Well” right away. Pass purchasers will automatically receive the album on April 21, and they’ll get lots of exclusive content over a period of several months.

The Sounds of the Universe tour begins in July, and the band has Los Angeles penned in for a two-night stand in mid-August.

Longtime fans of Willie Nelson know that he has not always been able to do things his way. Early in his career Nelson made a bunch of recordings in Nashville that were, to his mindset, overproduced by the studio bigwigs of the day.

Now Nelson has “un-produced” some of those songs, and the stripped-down versions are being re-released as Naked Willie. That means you can now hear classics like “The Ghost,” “The Party’s Over” and “Sunday Morning Coming Down” the way Willie wanted you to hear them in the first place. Naked Willie contains 17 songs and drops appropriately enough on March 17.

“The Party’s Over” is also one of the songs featured on the new Willie tribute album by Phosphorescent called To Willie. Phosphorescent is fronted by singer Matthew Houck who probably won’t be naked when he brings To Willie to life on the Regent Theatre stage March 14.

By now you know all about the Hopeless Records/Sub City Take Action! CD/DVD series and the similarly named annual tour, both of which benefit dosomething.org. This year’s compilation package is out; Take Action! Vol. 8 includes a CD with 20 cuts from acts like All Time Low, Meg & Dia, Anarbor and Cute is What We Aim For, while the accompanying DVD features 20 videos from the likes of Portugal the Man, Foxy Shazam, Hawthorne Heights and Plain White T’s.

Ten Out of Tenn

The Ten Out of Tenn collective features 10 of the hottest Tennessee-based singer-songwriters on the scene right now; folks like Trent Dabbs, Erin McCarley, Griffin House, Katie Herzig and K.S. Rhoads. Collective member Jeremy Lister is so good that the folks in Nashville are using the cut “Music Calls Us Home” from his Warner Bros. EP, Just One Day, as the theme for the city’s latest tourism campaign!

Ten Out of Tenn make their only local appearance at the Troubadour March 24.