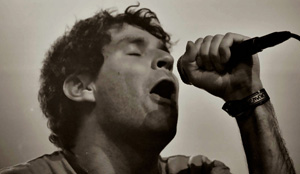 It seems Animal Collective are a magnet for the swarm of hippies who apparently exist in Los Angeles. While these indie-hippie folk did their weird dances, arms flowing and shit, to a massively applauded “My Girls,” a rendition of “Slippi” ringing with only half the chaos of its recorded counterpart and an extended version of the gorgeous “Fireworks,” they also turned out to be the same people who chatted with their neighbors and said courteous things like “excuse me” and “thank you.”

Who knew? Animal Collective has a polite fan base.

The downside to this show was that the Fonda’s simply too big to carry Animal Collective’s audible details as sharply as they’re heard on record. That’s why they played the Troubadour the following night, and that’s why they ought to go back to hour-long improvisations of animal noises.

However, the Fonda was made a bit more intimate via supporting act Ariel Pink’s Haunted Graffiti, said Haunted Graffiti being a backing band as tinny and vintage as the recorded junk that’s made it onto Pink’s records. And Pink himself, in a spandex jumpsuit and eco-friendly shopping bag, guzzling from a bottle, made for some – ah – interesting results (har har!).