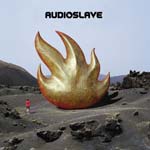 The missing link between Led Zeppelin and Nirvana, this much-anticipated supergroup (comprised of 3/4 of Rage Against the Machine and former Soundgarden vocalist Chris Cornell) arrived 20 years too late to be relevant, but the question is: can they rock? And the answer is: kinda. This album is overwhelmingly average. Average riffs, average lyrics, and average songs. I’m sure combining grunge and classic hard rock must have seemed a good idea to somebody, but damned if I know whom. Every song builds up and builds up, and you keep expecting them to rock out, until you realize the build-up is the song. At times, it contains echoes of Soundgarden’s greatness, but ultimately, it hits the same pitfall as Rage Against The Machine: the songs are repetitive and boring. Cornell screams real loud and sings real nice, but Rage can’t figure out that they’re providing backing for a real singer and not Zack De La Rocha’s whiny raps. The highlight is "I Am The Highway." in which they discover Bob Seger and rip him off instead of Led Zeppelin. Ultimately, a thoroughly underwhelming experience that won’t make hardcore Soundgarden fans put away their flannel or Rage fans put down their picket signs, but might make me get out my copy of Superunknown or Physical Graffiti. Grade: C
Article posted on 6/17/2004
This article has been viewed 1565 times.