Pacino Back in the Day 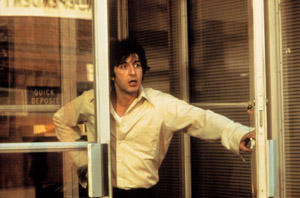 This week is going to be a little different. As I was sitting at my computer writing the original version of this column, pushing myself to sound excited about an upcoming movie that I’m not even really that excited about to begin with, I realized something.

I realized that I’ve grown a bit weary of sifting through the endless sewer system of movie press releases hoping to find just one project I have something nice to say about. All of the great films that were nominated for Oscars this year almost made me forget that the rest of the year is filled with sequels, remakes and rip-offs.

For every Milk, The Wrestler and Slumdog there are literally 10 to 20 titles that are bargain bin garbage. So for your reading pleasure, welcome to part one of my five part series that has nothing to do with any upcoming films.

PART I: The Trinity of Story

For those who don’t know, I am an up-and-coming writer/director. I’ve got representation, and I’m working on a few projects with several different people that are in various stages of development.

Filmmaking is everything to me. I love the art and craft of films more than life itself, and I often have to calm myself down when I see films where it feels like the filmmakers know they’re making an uninspiring, crappy film and don’t care.

What I’m going to write about today is the process in which I try to come up with a good story, which is also the way I evaluate other people’s scripts or completed films. This also applies to why I think most movies suck, and I use this principle coupled with the critique of my producing partners to hopefully keep my writing from sucking too.

To me, there are three components that go into a well-written movie: concept, story and script. If you score with all of them, you’re more than likely going to end up with something readable.

Concept is what is at the core of the narrative. It’s what your movie is about. The concept of Spider-Man for instance is “a crime fighter who has all the abilities of a spider.” The concept for Milk would be “the life of gay rights activist and politician, Harvey Milk.”

Story is the way in which the concept is laid out into a flowing narrative. Lots of films have similar concepts, but it’s the story that separates them. Dog Day Afternoon and Killing Zoe are both concepts about bank heists gone wrong, however, their different stories are what makes them unique from each other.

In Dog Day, the main character, played by Al Pacino, is a sympathetic regular guy who tries to rob a bank in New York with his buddy, only to have it go wrong and turn into a standoff with the FBI. The story sees the two bank robbers and their hostages actually get closer and find that they all have more in common with each other than they might’ve thought.

In Zoe, the main character, played by Eric Stoltz, is a safe cracker who is robbing a bank in Paris with a group of crazy, drugged up, trigger happy nut jobs who start killing people, which leads to a standoff with the police.

Story is how you lay out your concept and approach the material.

Script is how you bring your story to life. Script is dialogue, action and descriptions.

Even if you have a great concept and a great story you can still screw it up in the ninth inning if the script isn’t properly written. I’ve read a lot of scripts that had good concepts and interesting stories, but the script itself wasn’t as good. The art of script has its own language, and generally if the execution of the script isn’t good, you can tell pretty early.

The reason I bring all this up is because I firmly believe that the reason a movie is universally bad is because one or more of those three things are not being developed well. Developing and writing a great script for a film is not an easy task by any means, but if you put the work and the time in and make sure all the aspects of your piece are strong and unique, your script could be a great cinematic event and not just a way for people to mindlessly kill two hours.