With Games Like These, Sony will be Selling PSPs PDQ 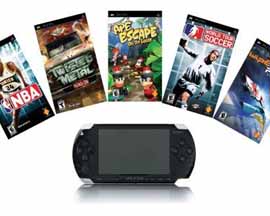 Sony won’t have any trouble selling the first million or so PSP systems, thanks to an impressive first crop of games.

A total of 24 titles from Sony and other publishers are gracing the PSP during the so-called "launch window." I didn’t get to test them all, but the ones I did run through more than show off the PSP’s capabilities.

Most of the games were titles published by Sony itself: "Twisted Metal: Head-On,’’ "Wipeout Pure,’’ "NBA’’ and "Untold Legends: Brotherhood of the Blade.’’

"Twisted Metal: Head-On’’: This car combat series is a well-known franchise to most gamers, and it’s definitely a lot of fun to play. The controls are pretty simple: use missiles, machine guns and special attacks to blow up all the other cars in each arena.

It’s a formula that never gets old.

There are also a couple of interesting multiplayer modes. If a few other PSP owners are nearby, play them head-to-head using the PSP’s internal Wi-Fi gear to communicate back-and-forth directly between PSPs. This is known as an ad hoc connection.

Or, if there’s a Wi-Fi hotspot in range or a Wi-Fi network set up at home, scour the Internet for other PSP owners logged into "Twisted Metal’’ anywhere in the world, and play against them. This is called an infrastructure connection.

When buying a PSP game, look on the back of the box and it will say whether it supports ad hoc or infrastructure connections (or both).

Unfortunately, I didn’t have a second PSP to test the direct link, and I couldn’t find anyone else online when I tapped into my home Wi-Fi network, since the PSP was not yet available publicly at the time.

Some highlights of the other titles:

"Wipeout Pure’’: If you want to see just how powerful the 3D graphics chip in the PSP is, this is the game to do it.

This futuristic racing game has players zooming down racetracks that swoop through clouds and mountains, beneath the ocean and between soaring skyscrapers.

"NBA’’: The developers of this basketball game clearly didn’t invest a lot of time in coming up with a name for their creation, and the gameplay is also somewhat uninspired.

The graphics are sharp, and the wide screen lets gamers see a lot more of the court than usual with basketball games on regular square televisions. But EA’s coming "NBA Street Showdown’’ for the PSP will probably be more fun.

"Untold Legends: Brotherhood of the Blade’’: This action-oriented role-playing game borrows a lot of graphical and gameplay elements from the excellent Baldur’s Gate: Dark Alliance franchise. It uses the same overhead viewing angle, with the same style of 3D characters and objects.

Instead of turn-based combat, where you select your attack and then wait to attack again in the next round, "Untold Legends’’ uses a real-time system, which means pounding the buttons as fast as possible to chop up the bad guys.

One of the big selling points for "Untold Legends’’ is the cooperative multiplayer mode via Wi-Fi, but once again I found that getting to be an early tester is a lonely perk.

I don’t particularly care for that genre, but it has a pretty hard-core following that will be pleased with the results on the PSP.

Since the action in these games always scrolls from side-to-side, the wide screen means that you have a bigger combat arena than ever before.

And the bright, colorful graphics look great on the PSP’s LCD.

"Untold Legends: Brotherhood of the Blade’’