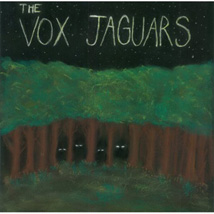 This debut from the Santa Cruz-based Vox Jaguars is only an EP with four songs, but it does exactly what a brief introduction should do: let you know what the band is all about and leave you hungry for more. A tribal drumbeat is the first thing you hear thumping out of the garage that tries to contain “Swagger,” but the song is quickly careening down the street with singer Jordy Topf barely keeping a hand on the wheel.

Topf is not snotty with his vocal delivery, but a big part of the band’s sound comes from his attitude; on “Song for the Girl” he channels early Mick Jagger while his style on “Homesick” borrows from the Stooges. Like many of the older garage bands, the Vox Jaguars use a basic two guitar, bass and drums lineup, but liberal use of organ riffs make them sound a bit like Boston’s much-revered Lyres.

Hopefully these guys will throw a little gas in the tank and roll with a full-length soon.

The Vox Jaguars is currently available.