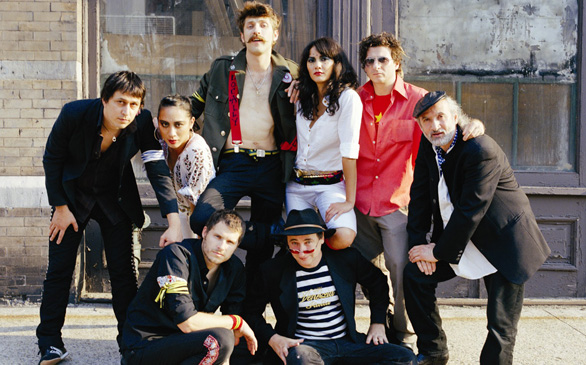 Neil Tennant and Chris Lowe have a simple reason for titling their upcoming release Yes.

Lowe explains succinctly, “We thought No was a little negative.”

There’s certainly nothing negative about the 30 million records that the duo has sold as the Pet Shop Boys – that total makes them the fourth most successful artist ever on Billboard’s dance charts behind Madonna, Donna Summer and Janet Jackson. Johnny Marr (the Smiths, Modest Mouse) plays guitar throughout the Xenomania-produced album that will also be released in a limited edition featuring six Xenomania dub remixes and “This Used to Be the Future,” a bonus cut with guest Phil Oakey of the Human League.

Besides working on Yes, the Pet Shop Boys have stayed busy remixing a track for Lady GaGa, producing a No. 1 U.K. hit for Sam Taylor-Wood and co-writing another U.K. hit, “The Loving Kind,” for Girls Aloud. They’re even working on a ballet.

Vanilla Ice has made a brief video wherein he apologizes for his 1989 hit song “Ice Ice Baby.” The singer, whose real name is Rob Van Winkle, looks straight into the camera and says he’s sorry for the hairdo, the baggy pants, the scandals, the lies, the gangs and most of all, the music. He further adds that he was very young at the time and was manipulated, calling himself a “puppet.”

Before you take the apology too seriously you need to remember that “Ice Ice Baby” is still the highest-selling rap record of all time having sold 40 million copies worldwide. Van Winkle made the video for a Web site called RightMusicWrongs.org, a promotional vehicle of Virgin Mobile that also pokes fun at other silly super-hits like “Shaddup You Face” by Joe Dolce, “Achy Breaky Heart” by Billy Ray Cyrus and everything by Milli Vanilli.

Entertainment mogul Loren Israel has announced the date of the next Band Boot Camp. The 12-hour event offers a crash-course in everything a band needs to do to get signed; workshops focus on abilities, songwriting, image, making the most of studio time and topics like how to get your music into films and television.

Industry executives from Atlantic, Universal, Warner Bros., Wind Up and Interscope will be in attendance, and participants will have a chance to perform for them. The event happens Saturday, June 6 at Uncle Rehearsal Studio in Van Nuys, and only 20 bands will be invited. Acts that want to be “The Next Great Band” can find additional info at bandbootcamp.com.

Eccentric singer Dan Hicks has been amassing a fan base ever since he had an underground hit with “I Scare Myself” back in the hippie era, and he’s about to release a new set of quirky, swinging folk songs called Tangled Tales. It seems that everyone who’s worked with Hicks over the years is a big fan: Tom Waits, Elvis Costello, Jimmy Buffett, Willie Nelson and Brian Setzer among them.

Mandolin master David Grisman, blues-harp king Charlie Musselwhite and slide guitarist Roy Rogers play on the new effort, and Hicks is notorious for having his famous friends make surprise appearances at his concerts. With that in mind there’s no telling who might hop on stage when Hicks and his band, the Hot Licks, play a show at the El Rey Theatre March 26. Tangled Tales drops through Surfdog Records March 24.