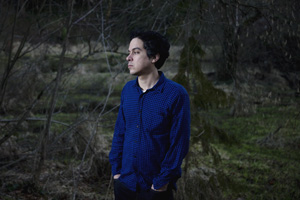 There aren’t many musicians who can get a sold-out venue full of jaded Angelenos dancing, armed solely with a six-string guitar, but Portland’s Matt Ward succeeded in doing just that. The singer-songwriter, guitarist, pianist … performer extraordinaire brought most of the tunes from his newest album, Hold Time, to the stage, including the incredibly catchy “Epistemology,” the twangy “Fisher of Men” and the emotionally touching “One Hundred Million Years.”

Songs from Ward’s older albums really got the crowd moving: “Chinese Translation” “Poison Cup” and “Requiem” from 2006’s Post-War, “Lullaby + Exile” and “Paul’s Song” from 2005’s Transistor Radio and “Vincent O’Brien” from 2003’s Transfiguration of Vincent. And you could tell Ward and his entire band were having a blast during a cover of Chuck Berry’s “Roll Over Beethoven.”

Even though I was hoping that L.A. country/Americana songstress Lucinda Williams would join Ward for “Lonesome Me,” the track she performs on Hold Time, it was his She & Him counterpart, Zooey Deschanel, who made an appearance. Deschanel enthralled the crowd with her powerhouse vocals on “You Really Got a Hold on Me” and “Change Is Hard” from the duo’s Volume One album then sang back-ups on “Rave On,” “Never Had Nobody Like You” and the encore, “Magic Trick.”

However, it was the moments when it was just Ward by himself on stage sitting at the piano or center stage with his guitar that made this night so memorable. As the show ended, I thought back to how Ward had began the evening, alone at the piano singing: “Now if only I could hold time.” I wished we really could have held time and stayed in that moment a little while longer.

Live Show Reviews
So good, so good! At SoFi Stadium, fans celebrate a real, live concert and a worthy cause
1,248 views