“Dogg After Dark”: When times are troubled, who do you turn to? The Doggfather. 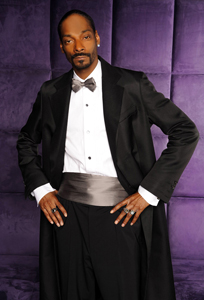 In the midst of the worst financial crisis in almost 80 years, Hollywood is desperate to provide a respite from the melee. What better way to offer escapism that to resurrect both musicals and vaudeville? Hey, it worked last time.

That must be what MTV is telling itself as they embark on their new variety show, “Dogg After Dark” with Snoop Doggy Dogg.

A variety show hosted by one of the biggest names in hip-hop, you ask? Isn’t the something he should leave to the Osmonds of the world?

The variety show is a lost art that has taken down many a sequined suited songbird. Jessica Simpson and Nick Lachey tried their hand at one; they ended in divorce. Rosie O’Donnell rolled out a Thanksgiving special; she was rewarded with the equivalent of a drumstick hook. So what makes Snoop Dogg so sure he’ll be able to resurrect a genre once lorded over by his idols Flip Wilson and Richard Pryor?

“I was born to do this,” he says in his signature butterscotch mumble one evening on the rooftop of The Kress, the five-story nightclub, which now houses “Dogg After Dark.” As rain clouds hover overhead and night falls, Snoop’s wrap-around sunglasses stay firmly in place as his lulling voice explains, “My show is just about people having a good time.”

There is no question that Snoop Dogg knows how to enjoy himself, the question is, will an audience want to voyeuristically take in the ambience with him?

MTV is banking on it.

“Dogg After Dark” is just one of several projects MTV has in the works with Snoop, all part of something he calls their “great plan of destruction.” After parting ways with Interscope, MTV will also be releasing Snoop’s new album, Malice in Wonderland, his tenth solo record, and they’ve also reached a deal to begin including Snoop’s songs on “Rock Band,” which is released by MTV Games. Their investment in Snoop is a way of both returning MTV to its music roots and filling the void left by “TRL,” which took its final bow at the end of last year.

So what can the audience expect?

“Spontaneous performances from rappers, comedic sketches, my uncle Rio downstairs cooking chicken wings and BBQ ribs, which is a different backdrop to any club environment slash TV show or late night show,” Snoop promises. “It’s not just a host sitting behind a desk interviewing guests. It’s flowing, it’s floor to floor, it’s action, it’s movement, it’s pretty girls, it’s great interviews, it’s a great time. Anytime you get down with me, you’re gonna have a good time at all times.”

Snoop also plans on using the program as a platform for emerging performers. Disappointed with what he says has become homogenized radio where “everything sounds like everything else,” Snoop wants his show to provide the kind of opportunities video play on MTV once gave musicians … back when MTV actually played music videos.

The show’s structure is a tried and true model which once belonged to the all time OG pimp daddy, Hugh Hefner, and his show, “Playboy’s Penthouse,” where Hef would roam around a set made to look like his apartment and host seemingly impromptu chats and performances.

When asked about the comparison, Snoop chuckles, “Hugh Hefner had them jumping out of swimming pools; I have them jumping out of Cadillacs. We do it a little bit differently. But, with all due respect, Hefner was the first to ever play it the way I’m playing it.”

Of course, this is the Snoop Dogg audiences will easily recognize and isn’t to be confused with the man they watch on his reality show “Snoop Dogg’s Father Hood.”

“This is my time to play. ‘Father Hood’ is more about taking orders and being in line in the house and this is me outside of the house, giving orders and doing my thing,” Snoop says as a lazy grin spreads across his face. “Don’t tell on me.”