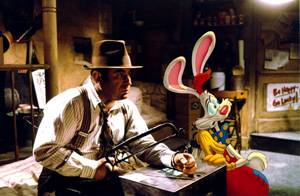 Remember the days when cartoons weren’t only on Adult Swim and our young imaginations ran wild with thoughts of ’toon-human coexistence? However secretly, we all still long to live in a world where giant black anvils fall out of the sky to hilariously crush our enemies, and there is no such thing as death, just slightly hurt pride.

Thankfully, during the late 1980s – somewhere between Mary Poppins and Space Jam – Disney brought this wonderful world to the big screen in Who Framed Roger Rabbit, and, even more thankfully, this weekend the Nuart is bringing it back. The Nuart has a reputation of hosting nostalgic midnight screenings and Roger Rabbit fits right into their impressive spring lineup.

By placing hand-drawn animation next to live-action stars and throwing them both into a 1940s Hollywood murder-mystery, Roger Rabbit pleased both kids and adults. A-list “actor” Roger Rabbit becomes the prime suspect for the murder of Marvin Acme, owner of the Acme Corporation and the city of Toontown, and private investigator Eddie Valiant (Bob Hoskins) – whose brother was murdered by a toon – is on the case. Christopher Lloyd plays the Slugworth-esque Judge Doom whose ultimate goal is to spray the whole town with a toon-eliminating solvent called “the Dip.”

The movie treats cartoons like human celebrities, showing their “off-camera” personalities and investigating a toon murder with real world fervor. Directed by Robert Zemeckis (Back to the Future and Forrest Gump) and produced by Steven Spielberg, this film was a favorite for every child of the ’80s. It united cartoon characters from across the realm (still the only time Mickey Mouse and Bugs Bunny have been in the same frame), inspired inappropriate crushes on Roger’s sexy toon wife, Jessica, and fueled expansions of three Disneyland theme parks for the appropriately labeled “Toontown.”