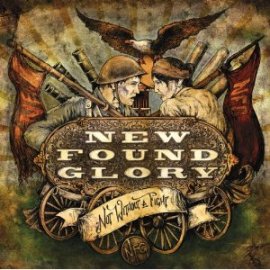 The title of New Found Glory’s latest album, Not Without a Fight, can seem self-explanatory at first glance, but the meaning goes a little deeper than one might imagine.

“New Found Glory’s been a band for 12 years. The biggest dilemmas in our lives are trying to keep relationships and all the times we pretty much fail at it,” explains guitarist Chad Gilbert. “So it’s sort of a metaphor for our personal war and the wars that you have in relationships with your loved ones.”

While the band’s last full-length album, 2006’s Coming Home, was brimming with youthful optimism, current situations dictated a different response this time around.

“When we wrote Coming Home, we were in love,” says Gilbert. “I was engaged. Jordan [Pundik, vocalist] was engaged. Everyone was psyched, but then everything went 360.”

Both Gilbert and Pundik went through divorces, and Gilbert found the best way to express these emotions was to revisit the fast-paced style of the band’s earlier days.

Yet while fans are quick to compare it to the group’s breakthrough Self-Titled release, Gilbert remains more than a little hesitant.

Another factor in the change of pace was that the songs from Coming Home, which were the most mellow of New Found Glory’s career, simply were not as fun to play live.

Meanwhile, relationships aren’t the only metaphor Fight represents. After Coming Home was released, the band found itself without a record label for the first time in its career, but the fight was far from over.

“When you want something bad enough in life you have to fight for it,” Gilbert says. “That’s like with our band. We love being in this band, and we’ll do whatever it takes to continue.”

That included recording Not Without a Fight sans a label and with little to no money. Fortunately, the band has friends in high places, like Blink-182’s Mark Hoppus, who agreed to produce the disc at his home studio knowing the band was good for it. The pairing turned out to be a perfect fit.

“We definitely would joke around a lot in the studio. It was a blast,” Gilbert says. “Mark really helped us get back to the core of New Found Glory and the raw kind of energy.”

The group eventually found a new home in Epitaph Records, a place that genuinely cared about New found Glory and its music, and now it seems like the band’s story so far has come full circle.

“Every album New Found Glory’s released is different in its own way, and we’ll continue to keep people on their toes,” Gilbert explains. “When we write albums, whatever comes out, comes out. We’re always real, and I think that’s why we still have the fans we do.”

If that isn’t something worth fighting for, then what is?

Not Without a Fight is currently available. For more information, visit newfoundglory.com.