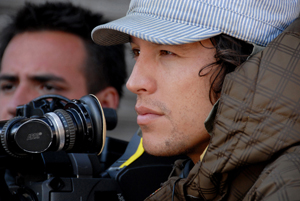 Sin Nombre, the winner of both the Directing Award and Excellence in Cinematography Award at the 2009 Sundance Film Festival, is a harrowing, haunting tale of unexpected beauty. The film explores the desire for love and trust, the meaning and yearning for the comfort of family, both actual and chosen, and how far human beings are willing to go in the hope of creating a better life for themselves and those they care about.

Shot largely from the top of moving trains traveling from Mexico toward America, the film follows Sayra (Paulina Gaitan), a teenage girl reunited with her estranged father when he returns to Honduras to help her emigrate through Mexico and into the United States. Sayra meets Casper (Edgar Flores) a gang member on the run from his violent past who quickly discovers sometimes you can’t leave your demons behind.

Executive produced by Gael García Bernal and Diego Luna, the film is one of the first major releases their production company, Canana, has brought to America. The pair, best friends for almost 25 years and able to finish one other’s thoughts, say their main mission is to create a company that reflects what they as audiences members would want to watch and also offer opportunities to young directors whose point of view they celebrate. Directors like Sin Nombre’s Cary Joji Fukunaga, the film’s scribe as well, who had previously made award-winning shorts but had never before embarked on a feature.

Both Bernal and Luna are quick to sing Fukunaga’s praises, calling him a “brilliant director.”

“He knew about his certainties and his uncertainties and how everything was going to be printed in film,” Bernal says. “Ultimately, that’s what seduced us into wanting to participate and formalized the relationship, because we could have done this just as friends helping each other out.”

Instead, Bernal and Luna quickly signed on as producers to shepherd the film along.

“It’s like we got married in a certain way,” Bernal smiles. “You try to become an accomplice of what the director wants to tell and, ultimately, that’s the best job of the producer, celebrating that point of view.”

Both Bernal and Luna were compelled to make Sin Nombre because they felt it “was the chance to talk about the immigration issues and to see this problem from a very objective point of view,” Luna offers. “This issue isn’t just an issue between Mexico, the United States and the border. It’s an issue that starts from the moment people are born with no opportunities, and that happens everywhere.”

Luna also admired the way the film dealt with something many tend to forget when discussing the issue of illegal immigration; the incredible danger and constant jeopardy, which the movie vividly illustrates, migrants face in order to even reach the border, which is the only moment most people recognize or debate.

Bernal was moved by the opportunity to potentially decriminalize immigrants, at least in the court of public opinion, and, in order to do that, they needed to paint an evocative, accessible portrait that audiences could relate to and sympathize with.

“These people, by definition, are criminals just because they are trying to look for work,” Bernal explains passionately. “There is no structure that allows them to do this transit in a legal way. They have to become illegal by doing one of the most generous and essential things in life, which is to try to make a living, without hurting anyone.”