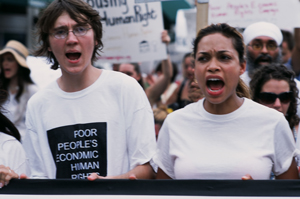 Rosario Dawson knows what’s up. She isn’t new to the plight of the poor in American society. In fact, Dawson grew up in a working class family on the Lower East Side of Manhattan. She’s down with the vernacular the film seeks to incorporate into mainstream conversation.

“It’s very graffiti,” the slim actress explains emphatically. “It’s very hip-hop. It’s full on. It’s what we like about the whole graffiti coming out. It’s this opportunity for people who don’t usually have a voice in our public to express themselves. It’s definitely altered over the years, but it feels old school to me. I love that.”

Explicit Ills depicts four interconnecting stories of the fragmented lives of Philly’s finest: a well-off artist starts a love affair with her drug dealer (Lou Taylor Pucci); a young boy reinvents himself to impress a girl at school; a couple struggle to open their own store while raising a son who is determined to win the World’s Strongest Man competition.

And then there’s Dawson’s character: a hard-working, careworn single mother of a severely asthmatic child, Babo, who is endearingly innocent. The most likable character of the bunch, Babo befriends a depressed twenty-something (Paul Dano) who is trying to become an actor. Each individual story culminates in the final scene where the characters come together and march the streets of Philadelphia demanding universal health care.

“That was a lot of the story I wanted to tell,” Dawson says. “I understand the stigma that is against poor people. I understand the stigma against people who are not healthy. It’s not fair. It’s not right because they are good people. They’re decent people and they’re willing to work hard to get themselves out of where they are. They just need help. All of us need help to some capacity.”

This film gives the unheard voices in society the opportunity to talk. Dawson particularly hopes it will raise awareness about poverty and health care in the United States. It doesn’t belittle the problems in America’s inner cities, but rather, addresses the lack of progressivism, so pertinent with the current state of the economy.

First time writer-director Mark Webber has the gift of stringing life’s small moments into the intricate, stylized web of a community. The theme of helplessness that Webber artfully weaves within the film’s fabric represents, according to Dawson, the decline of modern American society.

“We were going into Philadelphia and we were seeing all of these dilapidated buildings of these people whose stories don’t normally get told,” the actress explains. “It was a really brilliant way to let people know, especially the people who might not normally see this movie that this is for them. That this is their actual story and that it wasn’t going to be compromised in any way, shape or form.”

Though she has numerous projects coming up, including Sin City 2 for which she says she has not yet seen a script, Rosario Dawson remains committed to helping others. She sees her work as an actor as something more than just taking on personas. She’s ambitious; she wants to make you believe her, too.

“Hopefully it’ll trigger something in you. We hope that you fall in love with these characters enough and you recognize, maybe, just enough of yourself or someone that you know that can make the idea, these people, these numbers, these statistics that are up there actually mean people. That’s important to us to do something about these issues before they get any worse. Scarily enough.”