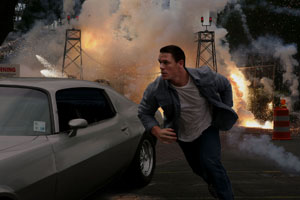 As award season recedes, taking with it all the weepy dramas money can buy, and winter gives way to spring, like buds on a tree, Hollywood is blossoming with indie darlings, teen phenoms and the first wave of blockbusters that will dominate the box office from now until Labor Day.

Starring John Cena, directed by Renny Harlin and produced by WWE Studios, is there any question that 12 Rounds is going to be bad? None. The question is, will it be so bad that it’s good? Like Michael Jackson bad! 12 Rounds pits Detective Danny Fisher (Cena) against an untraceable international terrorist who kidnaps his girlfriend (Ashley Scott) and forces him to go through 12 rounds of carefully plotted games, weaving through New Orleans. Expect explosions, fistfights and lots of Cena gritting his teeth and glaring.

Limp Bizkit frontman Fred Durst takes a swing at directing (and misses) in this wannabe The Catcher in the Rye meets The Great Gatsby indie. Jesse Eisenberg stars as Charlie Banks, a timid college student, who has to face his past when his childhood idol, Mick, the toughest kid in Greenwich Village (played unconvincingly by Jason Ritter), unexpectedly arrives on campus.

The Haunting in Connecticut (Lionsgate)

This is based on a true story of the Campbell family that moves into an old home in Connecticut to be close to the hospital where their teenage son is being treated for cancer, only to discover it’s haunted (We love self-explanatory titles.). Starring Virginia Madsen and Elias Koteas.

When the Earth comes under attack by aliens, the U.S. government’s only hope is to unleash the monsters it has been holding in captivity for years. Featuring the vocal stylings of Reese Witherspoon, Seth Rogen, Kiefer Sutherland, Paul Rudd and Hugh Laurie, this is DreamWorks’ first 3-D feature and the first film ever to be created specifically in 3-D rather than transferred to 3-D in post-production. Hopefully that means no weird, blurry red and blue outlines.

Shall We Kiss? (Music Box)

Bien sur! Who does romance like the French? No one. The film unfolds in flashbacks, telling the story of why there is no such thing as a simple kiss and proving all of life’s pleasures and complications begin with three little words: “Shall we kiss?”

From acclaimed director Kiyoshi Kurosawa, Tokyo Sonata is perhaps what American Beauty would have been if Kevin Spacey hadn’t relished his descent. While Kurosawa is a master of J-horror, this film delves into the intricacies of a family falling apart and is already heaping with critical acclaim after enrapturing audiences at Cannes and the Toronto Film Festival.

In the summer of 1987, James Brennan (Jesse Eisenberg), fresh out of college and all set for a European vacation, learns that his parents can no longer subsidize his trip. He takes a suck-tacular job at a local amusement park run by “SNL”-ers Bill Hader and Kristen Wiig. Luckily, he’s got Twilight’s Kristen Stewart to fall in love with and help him pass the time.

Imagine War of the Worlds meets Reefer Madness. Set in the Mojave Desert in 1957, a spaceship crash-lands and begins to wreak havoc on a small town. Starring Robert Patrick, who knows a thing or two about aliens, Eric McCormack and Dan Lauria, who many remember as the dad from “The Wonder Years.”

Bart Got a Room (Anchor Bay)

Danny is a man with a mission. He needs a prom date, stat. His quest only becomes increasingly pathetic once he and his family (William H. Macy and Cheryl Hines in the worst permed wig in history) learn that Bart, the biggest loser in school, not only has a date for the prom but got a hotel room as well.

“New model. Original parts.” In the fourth film in The Fast and the Furious franchise (say that five times fast), Vin Diesel, Paul Walker, Jordana Brewster and Michelle Rodriguez return to the roles that launched the series. Dominic Toretto (Diesel) and Brian O’Conner (Walker) reunite back in Los Angeles for more amped up fun. Hail, hail, the gang’s all here … and they brought the NOx.

Consider Paris 36 a smaller, more intimate, less grandiose Moulin Rouge with shades of Cinema Paradiso thrown in. Three unemployed performers decide to stage a coup on a once vital music hall and stage a show that will return it to its former glory.

It took this South by Southwest favorite almost two years to find distribution (it won the Audience Award in 2007), but Skills Like This finally makes its way to theaters. When a playwright almost kills an audience member with his horrendously unwatchable work, he turns to a new calling, crime, and discovers he has mad skills.

From Anna Boden and Ryan Fleck, the writer-director team behind Half Nelson, Sugar is the story of a Dominican baseball player brought to America to pitch in the minor leagues. It’s The Rookie without the Disney-fication.

Who Does She Think She Is? (Mystic Artists)

A documentary about the struggles women face trying to balance motherhood and their artistic drive while also dealing with a world that pays them lip service but offers little respect or support.

Based on the Manga series, the film follows Goku (Justin Chatwin) as he sets out to find Master Roshi (Yun-Fat Chow) and gather the seven mystical Dragon Balls before the evil Lord Piccolo (James Marsters) can.

Anvil! The Story of Anvil (Abramorama)

At 14, best friends Robb Reiner and Steve “Lips” Kudlow made a pact to rock together forever. Their band, Anvil, was formed in 1978, is considered the godfather of Canadian Metal and has influenced Metallica, Slayer and Anthrax. But Anvil never hit the big time. This documentary follows them after a calamitous European tour as the musicians, now in their 50s, set off to record their 13th album in one last attempt to be stars.

Asking the question: con or artist, Forbidden Lie$ is a dramatized documentary, which investigates accusations that Forbidden Love author Norma Khouri pulled a James Frey and made up her biographical tale of a Muslim friend who was killed for dating a Christian.

Seth Rogen, Anna Faris and Ray Liotta star in what is quickly becoming Hollywood’s favorite new genre: the mall-security comedy. Following in Paul Blart’s footsteps, Rogen stars as Ronnie Barnhardt, a bipolar mall security guard who must stop a flasher from turning shopper’s paradise into an impromptu peep show. When Barnhardt can’t get the job done, a surly police detective (Liotta) is recruited to take over, igniting the fires of Ronnie’s evil side.

The Song of Sparrows (Regent Releasing)

The film is about a simple, honest, generous man from an ostrich farm outside of Tehran, Iran, who begins to lose his humanity once he arrives in the big city.

If Big met It’s a Wonderful Life, you’d have 17 Again. Mike O’Donnell (Matthew Perry) has lived a life full of regrets since one afternoon in high school. With his marriage on the rocks and his children wanting nothing to do with him, Mike just wishes he could have a do-over. Magically, he becomes himself (played by Zac Efron) at 17 and has the chance to live the life he always wanted and pave the way to a better adult existence. Don’t we all want to wake up and be Zac Efron for a little while?

A portrait of five ballerinas from the Mariinsky Theatre, formerly known as the Kirov.

No one does raw action like Jason Statham. Picking up exactly where the first film left off, the second Crank installment resurrects Chev Chelios as he hunts down the mobster who stole his nearly indestructible heart and replaced it with a battery-powered ticker that requires constant, massive jolts of electricity to keep working.

Downward dog this! Filmmaker Kate Churchill is certain that yoga can transform anyone. Nick Rosen, her whipping boy/guinea pig, is skeptical. So Nick sets off on a six-month immersion into the world of yoga that takes him around the world on the hunt for transformation.

Every Little Step is a documentary, which follows the life-imitating-art plight of real-life dancers as they struggle through auditions for the Broadway revival of the singular sensation “A Chorus Line.” God, I hope I get it!

From the producers of Junebug and I’m Not There, Gigantic debuted at the 2008 Toronto Film Festival with an impeccable pedigree. The film stars Paul Dano as a mattress salesman who finds his plans to adopt a Chinese baby thrown off when he falls in love with Happy (Zooey Deschanel, whom everyone falls in love with).

Is Anybody There? (Big Beach)

A 10-year-old boy whose parents have converted their house into an old age home becomes obsessed with ghost hunting and paranormal activity as a way of coping with the death surrounding him until a new resident, former magician the Amazing Clarence (played by the amazing Michael Caine), arrives and teaches him how to connect with the living.

Executive produced by Martin Scorsese and starring Alec Baldwin (also a producer), Rory Culkin and Emma Roberts, the film – set in the late ’70s – is about two families, intertwined and torn apart by money, lust and Lyme disease.

U.S. Congressman Stephen Collins (Ben Affleck) is a rising star in the world of politics and has a picture perfect life … until his research assistant, who was also his mistress, is murdered. With star reporter Cal McCaffrey (Russell Crowe) and his co-hort Della (Rachel McAdams) hot on the trail to uncovering the truth, things become even more complicated thanks to Cal’s friendship with Stephen, his ruthless editor (Helen Mirren) and a conspiracy that goes far deeper than anyone imagined.

A New York City counterfeiter (Channing Tatum in all his shirtless glory) is introduced to the world of underground street fighting by a con artist (Terrence Howard) who becomes his manager on the bare-knuckling brawling circuit.

Arguably the worst film of the 2009 Sundance Film Festival, The Informers is based on Bret Easton Ellis’ novel of the same name. Set in yuppie heaven, a.k.a. early 1980s Los Angeles, the film meanders along multiple storylines, one more lethargic and uninvolving than the next. With an all-star cast, the only truly captivating thing about this cautionary tale of sex, drugs and rock ’n’ roll, is Amber Heard nudity, which is pervasive. Sadly, this is also Brad Renfro’s last performance, though he’s almost unrecognizable.

Starring John Malkovich, Hellboy’s Ron Perlman (for once out of major makeup) and the former Punisher, Thomas Jane, the film is set in 2707, as an army sets out to save the Earth from a mutant menace. From production values to plotline, there are shades of Starship Troopers all over this bad boy … and that’s not a good thing.

You’ve seen this movie before but it was called Fatal Attraction and/or Swimfan and it included a one-night stand. Idris Elba stars as a successful businessman whose casual flirtation with the pretty new girl in the office (Ali Larter) turns dangerous when she becomes obsessed with him. Beyoncé Knowles is pitifully cast as the woe begotten wife.

Based on the true story of Steve Lopez, a Los Angeles Times reporter played by Robert Downey Jr., who befriends Nathaniel Ayers (Jamie Foxx), a brilliant, schizophrenic, Juilliard-trained violinist who dreams of performing at the Walt Disney Concert Hall. Once primed for Oscar glory, the delayed release of The Soloist leaves us questioning its caliber.

Get to know more about Mike Tyson, the ear-biting, wife-beating, former heavyweight champion, through a mixture of original interviews, archival footage and photographs.