The Long And Short Of It: Cropped Pants and Pretty Skirts Dominate Current Fashion Scene 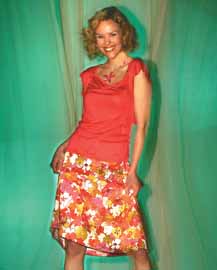 They seem to come out of the blue. They are the fashion trends that suddenly saturate our awareness like a bad Jay Leno joke.

Consider this spring’s fashion scene. At the top of the roster, soft, flowing skirts are patterned in everything from meditative outdoor scenes to overdone flowers and geometrics. Another major trend is cropped pants, which may be the simplest, most comfortable garment women adapt this summer.

Most ideas surface first on some designer’s runway, sometimes six months to a year before they enter the full fashion arena.

"It makes a huge difference when something great comes down the runway," says David Wolfe, creative director of the Doneger Group, retail consultants. Almost "everything that becomes fashion that people want to wear" starts there.

But professionals watch so many shows now with so much drama of little value that the potential hits do not always linger in the consciousness, Wolfe says. Many costumes are created as much for entertainment and instant press coverage as for feeding the fashion machine with fresh ideas.

Dutch designers Viktor and Rolf, for instance, recently showed clothing in Paris inspired by white quilted bed linens. "That will make it into the press," Wolfe says, "but no one will see the beautiful white shirts they did."

As for the pretty skirts moving into stores and magazines, they first appeared in Prada’s straightforward collection in Italy for spring 2004. The skirts are now fashion stars available in many versions and prices from such names as Oscar de la Renta, Anne Klein, BCBG Max Azria, DKNY, Ellen Tracy and Banana Republic.

The cropped pants started to surface in Europe several years ago. Short and gathered, they were also part of the early Prada collection for 2004. And by spring shows last fall, they were ubiquitous on runways. At Chanel they were gathered and held with a band on the calf. They were cropped at or above the knees like shorts at many houses, including Diane von Furstenberg, Carolina Herrera, Donna Karan’s DKNY and Banana Republic stores.

As for other looks this warm-weather season, the return of the spring coat has been widely heralded and has been spotted in diverse lines such as Tracy Reese, Carolina Herrera, DKNY and Banana Republic. Black has reappeared alone or in combinations with white.

If you’re spring shopping in the stores – or even in your closet – here are the ideas making news for warm weather:

– Cropped pants that reach shy of the knees or well below

– Soft skirts that swing and sway

– Ethnic patterns from far away places

– Halter tops that reach well over the waistband

– Shoes drenched in glitz and beads

–Mixtures of textiles and fabrics