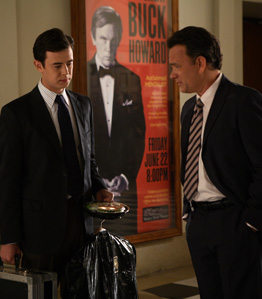 First, I’m gonna need some audience volunteers. How about the father and son in the first row? Tom and Colin Hanks was it? Come on up here. And bring your crazy looking friend with you. Hello, John Malkovich. Welcome.

Now, do we have any writer-directors in the audience no one has ever heard of? Sean McGinly, thank you! Come join us on stage. And bring that script you wrote all about yourself with you. You know, the one about the magician/mentalist who gets a law school drop out to be his new road manager. That’s it! Fantastic.

OK, Malkovich, you’ll play loser magician/mentalist Buck Howard who makes it big but then decides to give it all up for a reason we will never bother to make clear. I warn you, this is a one dimensional, completely unsympathetic character, so you’re going to have to over act the hell out if it. I mean really ham it up. What? You’ve made a career out of doing just that? Perfect.

Colin, you’ll play the … oh, it doesn’t matter. Just sleepwalk your way through and I’ll wake you for the third season of “Mad Men.”Oh, and Tom, oh, hell, I don’t know, play his dad or something. Can you do that?

OK, I think we have everything, so, here goes. Now, watch as I add a few million dollars, 87 minutes, a title begging to be mocked and … VOILA! Right before your very eyes I give you nothing! Absolutely, positively nothing worth mentioning or talking about or drawing any sort of attention to in the least.

Thank you very much. I’ll be here ’til weekend box office numbers become official, then you can find me at the bottom of the clearance bin at your local Blockbuster.


The Great Buck Howard releases in select theaters March 20.
Article posted on 3/19/2009
This article has been viewed 1563 times.