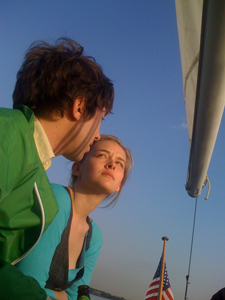 South by Southwest includes an annual film festival held in Austin, Texas that explores all the aspects of the art and business of independent filmmaking. This year, the event showcases over 130 films, screened in eight different theaters. Particularly noteworthy is the new method festival coordinators are employing to involve those who are confined to the comforts of their own home. SXSW 2009 will usher in the debut of an innovative collaboration with IFC Films. A selected quintet of movies will be available simultaneously at SXSW Film Festival and on-demand, coast-to-coast via IFC Festival Direct.

Joe Swanberg’s Alexander the Last presents an investigation into the neuroses of modern relationships, particularly the tricky interaction between a creative professional life and the vulnerability of a young marriage. Though highly anticipated, Alexander left this viewer frustrated by its dull, overly abstract depiction of love/love lost/love found in the modernity of American society.

SXSW and IFC also present two U.S. premieres. Three Blind Mice is a dark Aussie comedy chronicling three naval officers on their last night before they are shipped off to Iraq. All three are charming, attractive men who do not have difficulty finding ladies and a fulfilling night out on the town. Filmmaker Matthew Newton produces a fresh and quirky film that doesn’t try to make overtly obvious political commentary or subtle social critiques, but delivers a convincing dark dramedy about the very human impulse to reach out for someone. It is not a film of epic proportions; nonetheless, it is infused with guaranteed audience appeal.

The last of the U.S. premieres and by far the best film of the bunch is Javor Gardev’s dazzling noir heist flick, Zift. A fragmentary tale of deception and social unrest in the thick of Communist Sofia, Zift is a remarkable, extraordinarily stylistic, black-and-white film that marks a high point in Bulgarian filmmaking. It has generated serious buzz, including its selection as Bulgaria’s official 2009 Oscar entry. Of the five films, this is the must-see.

An encore presentation of two films from SXSW 2008 is included in the package, giving new viewers the chance to discover what was so good last year that they were brought back for more. Critically acclaimed in 2008, Barry Jenkins’ lovely, subtle film Medicine For Melancholy and Joe Maggio’s Paper Covers Rock complete the lineup.


All five films are currently available on VOD.
Article posted on 3/19/2009
This article has been viewed 2356 times.