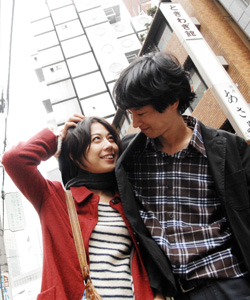 It was done for the City of Lights in 2006’s Paris, je t’aime. New York is getting attention in the forthcoming sequel New York, I Love You. Each film consists of several featurettes that highlight themes and imagery that correlate between these shorts. Of course, I adore New York and I yearn to see Paris, but now, I think I love Tokyo the most!

“Interior Designs” by director Michel Gondry is the first featurette about a young couple (Ayako Fujitani, Ryo Kase) who live temporarily with a friend in the city. Hiroko is an aspiring filmmaker and his girlfriend Akira supports him, though she has no ambitions for herself. The story takes a turn from the real to the fantastical, exposing the Japanese inclination for a fusion of the traditional fairy tale with a fanciful twist.

“Merde” by director Léos Carax is a film completely immersed in the surrealist hyper-reality of a futuristic and otherworldly Tokyo. Merde (Denis Lavant) is the humanlike, gibberish-spewing unkempt creature living in the sewers and occasionally venturing to the world above to brazenly roam the streets and kill unsuspecting citizens. When he is finally caught, Merde is tried, convicted and sentenced to death. But sometimes justice isn’t so sweet.

“Shaking Tokyo” by director Bong Joon-ho is the final featurette of the triptych. A hikikimori, or hermit, (Teruyuki Kagawa) has not left his house or interacted with another human in 10 years. When he makes eye contact with the pizza delivery girl, his entire world is shaken. Literally. An earthquake causes the recluse to fall in love with the girl. But when she inversely becomes a hikikimori too, will our protagonist be able to face the dreaded daylight to get to her?

There is a magical quality about Japanese filmmaking that is genuinely fascinating. Though Joon-ho’s “Shaking Tokyo” feels quite barren and void of gumption, “Interior Designs” is a masterful piece of storytelling. Its linear narrative takes a turn for the very unexpected, causing the viewer to question the purpose of a life in society.

Léos Carax also has an amazing eye for the weird and the wonderful. His subterranean creature character is as hypnotically interesting as any alien or witch, if not more. His ability to tell a story with little dialogue demonstrates his knowledge of silent film and attests to his underappreciated talent.

Tokyo really comes alive in this astonishing piece of work that doesn’t seek to promote Japanese tourism. Rather, the filmmakers take you into a mystical world that is too good, but certainly true.