Queens of the Stone Age: Set to Paralyze with their Own Brand of Lullabies 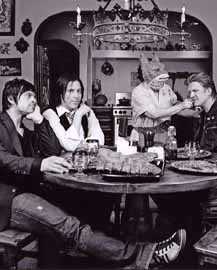 The word "lullaby" is typically not the first that comes to mind when attempting to describe a Queens of the Stone Age song. Yet the term begins the title of the band’s latest release, Lullabies to Paralyze. One expects no less from a group that continues to evolve and thrive on taking the conventional, turning it upside down and smacking it on its ass.

QOTSA’s songs blur the lines of rock and punk while possessing catchy hooks and provocative, tongue-in-cheek lyrics. This balance of extremes is typical for most of what the band does, a style characterized by drummer Joey Castillo as "touching on all these things, yet still its own thing."

Even the band’s name is about the balance of male and female with the intent to appeal to everyone.

"You want to include everybody," remarks Castillo. "You don’t exclude anybody when you’re writing music for any reason of a genre or a label. To write music [that’s] just for dudes, or just for chicks or just for 15-year-olds, that’s boring. That’s not art at all."

Queens of the Stone Age is not only unconventional in its approach to songwriting, but also in the ever-rotating band lineup. A cast of characters whose resumes read like a who’s who of influential rock bands – Kyuss, A Perfect Circle, Danzig, Screaming Trees and Failure – just to name a few.

Since the band’s inception in 1997, vocalist and guitarist Joshua Homme has remained the center of the group, which has showcased the likes of Dave Grohl, Matt Cameron and Nick Oliveri and currently includes multi-instrumentalist Troy Van Leeuwan, bassist Alain Johannes, and sometimes vocalist Mark Lanegan.

Castillo took his place behind the QOTSA drumkit in 2002 after an impromptu audition the day before the band embarked on tour in support of Songs for the Deaf.

"I got the gig that day, so it was pretty wild. A really pressed-for-time situation, but it was immediate," Castillo recalls. "We all knew we were on to something and we were willing to put in the work that was going to be needed. We had about eight hours to do it!"

Not only is Castillo getting used to recording with the other members of QOTSA, but he’s also growing accustomed to the specific technique Homme used when recording drums.

"We recorded the drums completely separate from the cymbals so it’s basically like recording the song twice. It actually tends to force a drummer to be a bit more creative, a bit more focused on what the song and each part is doing," explains Castillo. "It also gives you the freedom when you do come in with cymbals to try a few different things as far as patterns and sounds."

This technique was used on Lullabies, which was produced by Homme and Joe Barresi (Melvins, Bad Religion, Hole) and features a guest appearance by ZZ Top’s Billy Gibbons. For one song, backing vocals – although almost undetectable – are contributed by Garbage’s Shirley Manson and The Distillers’ Brody Dalle.

Castillo describes the album as "a record that was going to go from light, from the first part of the record; twilight, from the middle of the record – being like ‘The Blood is Love’ and ‘The Wolf’ – dark, from ‘Killer Scene’ on; and then right into the light again with ‘Long Slow Goodbye.’"

Castillo views music as "the medicine of the world."

"Most people just don’t know that, unfortunately," he says. "I can’t imagine a place or the world or even my life without it. It’s just something that I knew as a kid. I knew the attraction, what it did to me and how it made me feel. It was just something that was an instant love."

As the artwork within Lullabies to Paralyze is reminiscent of a fairytale picture book, Castillo seems content in finding his "happily ever after" playing music with this set of Queens.

Lullabies to Paralyze is currently available. Queens of the Stone Age will play on Monday, April 18 at the Henry Fonda Theatre in Hollywood. For more information, visit www.qotsa.com.