THE EDUCATION OF FRED DURST: Rock Star in Director’s Chair for Charlie Banks 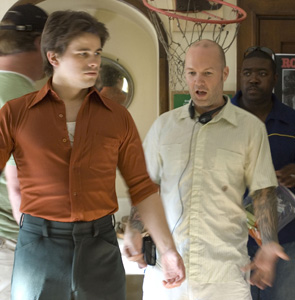 Jason Ritter and Fred Durst on the set of The Education of Charlie Banks
(Credit: Courtesy of Anchor Bay Entertainment)

Long known as Limp Bizkit’s Woodstock-riot starting, smack-talking, Britney Spears-loving frontman, Fred Durst’s presence in the film industry is growing with the release of his directorial debut. The Education of Charlie Banks follows Charlie Banks (Jesse Eisenberg) from childhood to college where his pristine Ivy League existence is shattered by the arrival of Mick Leary (Jason Ritter), the neighborhood thug he’s lived his life in both fear and awe of.

Though the film is being distributed after his follow up, 2008’s The Longshots, Charlie Banks was shot in 2006 and marks Durst’s initial transition from music videos to the realm of film with the mantle of director.

His evolution behind the camera has been chronicled by Limp Bizkit’s videos, all of which were helmed by Durst. They began, with songs like “Faith” and “Nookie,” as by-the-numbers concert and fan footage intercut with behind-the-scenes tour bus B-roll and gratuitous band glory shots done with fish eye lenses.

But they matured into the [David] Fincher-esque “Eat You Alive” in 2003. The video features Thora Birch and Bill Paxton and has chiaroscuro cinematography, motif, storytelling and impressive composition. Instead of a four-minute video scrapbook for a song, it’s four minutes of intense, textured, beautifully shot storytelling.

Sitting down with Durst in Los Angeles’ SLS hotel, he’s a kinder, gentler rock star than the man whose music was once accused of causing riots, death and mayhem. The signature backward ball cap is still firmly in place, but the hair underneath is becoming more salt than pepper, and there’s a surprising eagerness as Durst discusses his love of movies and how he stumbled upon fame and fortune with Limp Bizkit on his way to what he calls his “true passion.”

“I always wanted to be a filmmaker,” Durst begins. “I never wanted to be a rock star. That coming along the journey to being a filmmaker was very interesting, especially having some success with it, being known for it and then it inevitably being an obstacle.”

Becoming famous was what opened the door to Hollywood for Durst, but he was incredibly wary. He understands that fans can be dubious of genre hopping and making the leap from mosh starting badass to auteur would be treacherous.

“A lot of people don’t like actors who become rock stars and vice versa. There’s the exceptions, and those have become significant.”

The problem Durst initially faced was being taken seriously by the industry and their expectations of what sort of projects would fit him best.

“I was being offered jobs but they wanted me to do an MTV music video-style to these throw away genre scripts and that’s not what I’m attracted to.”

While waiting for the right project to come along, Durst was introduced to David Fincher, whose work he hugely admired. The two hit it off, and Fincher took on the role of mentor, a relationship that Durst credits with his evolution and understanding of how to be a filmmaker and which also made him refocus his attention on how to launch a directing career.

“In my mind I was serious,” Durst chuckles, “but he showed me how to really take it seriously. I had to wait on the right material. Luckily, something came that I felt I could apply my passion to. When this script came along I just felt strongly that I could dance on both sides of this coin because I am an underdog like Charlie Banks, and I am Mick Leary. I identify with both of these guys equally, and I’ve lived both of their lives.”

The Education of Charlie Banks releases in select theaters March 27.