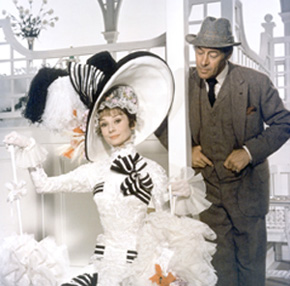 A few blocks south of the massively modern buildings defining Hollywood’s modern identity, the Linwood Dunn Theater is remembering some of the city’s older, barely-color exports. Although billboards for new movies loom outside, the lobby of the Academy of Motion Picture Arts and Sciences’ theater is full of costume design sketches and black mannequins adorned with the wearables seen in a range of early color films from The Adventures of Don Juan to A Star Is Born.

The exhibition, which runs through the beginning of May, analyzes important aspects of costume design during the crucial color years of 1940 to 1960 and includes two accompanying screenings of featured movies My Fair Lady and The Great Race. In addition to the opportunity to watch these two classic films on the big screen, this Saturday and Sunday’s showings also provide two pre-show hours of exclusive viewing time of the exhibition and the ornate costumes used in the films.

My Fair Lady, Saturday night’s film, is 1964’s Audrey Hepburn rendition of the Broadway musical highlighting Eliza Doolittle’s rise in British Victorian society through the alteration of her abrasive cockney speech. A classic example of American cinema, the movie won eight Oscars (which are given out by the same Academy that is organizing this screening) and inspired a yet-to-be-released remake starring Keira Knightley.

On a lighter note, The Great Race is a Natalie Wood and Jack Lemmon slapstick based on the “around the world” race craze of the early 1900s. Also an Oscar winner, the 1965 movie follows a nutty professor (pre-Eddie Murphy), a magazine editor and a young suffragette (among others) as they race early-century cars from New York to Paris.

The movies are heavily represented in the Dressed in Color: The Costumes exhibition, and their 1920s garb is colorful, complex and impressive both in and out of context. Public viewing hours are only during Academy events, so spend a weekend with some cheap screenings of ’60s color classics and an accompanying exhibit exploring the often-ignored cinematic art of costume design.