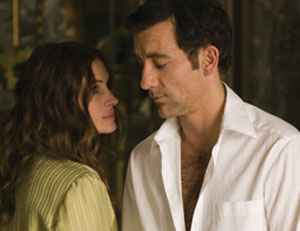 That spark of casting genius produced some incredibly memorable cinematic moments and even led to Roberts declaring that she “loves” Owen. Yeah … that makes two of us.

In director Tony Gilroy’s Duplicity, the lanky Englishman and America’s consummate Pretty Woman are back at their ever-popular best. He plays Ray, a former MI6 agent who has now taken up shop in the private sector. Roberts is his on-again, off-again love, Claire, and was once a CIA operative, who is now doing the same work as Ray, but for another large corporation.

But wait! There’s more to it than that. Paul Giamatti and Tom Wilkinson portray two battling billionaires who want to destroy each other. They bicker and fight and look for the best possible opportunity to collapse the other’s fortune and take the crown as the king of all business.

Ray and Claire respectively work for each. Or maybe they don’t. At one point it kind of looks like they’re working as a team against the money guys. But, how can they be working together if they don’t really know each other? Sounds confusing, right? Believe me: It is.

Duplicity is stylish and just as much fun as Steven Soderbergh’s Ocean’s Eleven, Twelve and Thirteen. Spy and suspense comedies are a real blast with the right casting, and this one has struck gold.

Still, it’s a bit of a pill to get into. The deconstruction of time device (made popular in recent years by director Quentin Tarantino) does little to engage the viewer in Duplicity’s plot and everything to confuse and unsettle. Within 20 minutes of the movie’s start, people were squirming in their seats; uncomfortable that the novelty of watching Owen’s sexy British swagger play against Roberts’ timeless beauty had clearly evaporated into thin air. There was even a moment or two when the storyline derailed into such an abyss that people could be heard heckling it.

Luckily, Gilroy [somehow] manages to bring it all home with a powerful second act and a third act that is funny, charming and unexpected. He’ll have you at the edge of your seat wondering what’s going to happen next.

Fan loyalty will ultimately be the saving grace of Duplicity. You can bet Owen’s sweet ass on it.

Duplicity is currently in theaters.