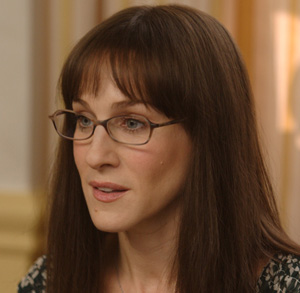 A black student at a predominantly white liberal arts college in Vermont is being harassed. Not by scores of boisterous frat boys. Not by listless locals, but by a nameless, faceless predator, hell-bent on scaring him out of the institution.

An administrator – the dean of students (played by Sarah Jessica Parker) – is enlisted to help quell the onslaught of negative feelings amongst the races and the ensuing bad press that follows from the incident. Her previous work experience at an inner-city college in Chicago makes her the “obvious choice” to tackle the scandal.

The student body is in an uproar, eyeing each other contemptuously. Buttons are pushed; dialogues form. Finally, everyone’s hate bubbles and brims to the surface. All the while, a stalwart journalist (Forrest Gump’s Mykelti Williamson) follows the story with a slightly less-than-objective view.

Spinning Into Butter delves into the gross injustices that can happen when people stop being polite and start acting like real idiots. Sadly, everything about this film is just that: idiotic.

Based on the sharp satirical work, Little Black Sambo, Spinning Into Butter somehow became a celebrated play and later evolved into its latest incarnation as a film. This project is so unintelligible and convoluted there are not enough words in the English dictionary to describe it.

First, the direction is a bit too pedestrian. It looks as though it was shot by someone brought up on a strict diet of “after school specials.” Secondly, the acting isn’t great. Parker, a vivacious standout in nearly everything she does, is drab and sickly in this role. Actress Hope Davis, who portrayed the same character in the theatrical version, looks years younger and more effective in the part. Williamson is also a disappointment. Perhaps the real reason why audiences haven’t seen his career multiply in the days since Gump is because the guy can’t act. There’s no chemistry between his reporter and Parker’s dean.

Spinning’s take on racism is also quite strange. The alleged victim of the racial strife is so passive and sweet natured about everything going on around him, despite the gravity of the situation.

Still, the ultimate letdown of the movie is the big plot twist. Why anyone would choose to glorify a sociopath by asking audiences to sympathize with him is beyond me.

I could smell this fiasco of a climax a mile away.