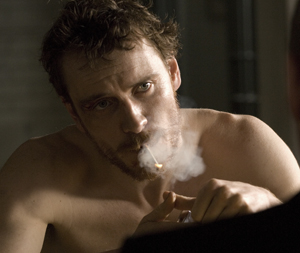 Steve McQueen’s horrifying depiction of the Irish hunger strike will probably make you rethink that popcorn and Slurpee from the concession stand. In fact, it might also help you kick-start the diet you’ve been putting off. For once, cinema may help a society of over-eating Americans appreciate the health and freedom we so often take for granted.

Following the 1981 IRA Hunger Strike led by Bobby Sands (Michael Fassbender), Hunger chronicles the inmates of the Maze Prison in Northern Ireland who pushed their minds and bodies to devastating heights in order to make a political statement.

Raymond Lohan (Stuart Graham) is an ordinary man who lives by a strict routine from his post as a prison officer. He works at the infamous H-Blocks where radical prisoners commit themselves to the Blanket and No-Wash protest. Young Davey Gillen (Brian Milligan) is one of these prisoners who learns the ropes from his hardened cellmate Gerry Campbell (Liam McMahon).

The cells are filled to the brim with a mixture of food and feces, and the prisoners are treated with tremendous brutality by the residing officers. It is hell personified.

Revolutionary Bobby Sands is disgusted by the government’s treatment of the prisoners, and he leads the others in a new hunger strike to protest the implementation of special category status for Republican prisoners. Father Dominic Moran (Liam Cunningham) acts as the moral compass in the film when he tries to convince Sands to call off the strike. But he has no such luck. Sands’ body deteriorates, but the spirit of his cause eventually brings justice to the oppressed.

This is not a film you should drag your grandmother to, and it surely is not for the fainthearted. The images are often gruesome, and there is a no-holds-barred attitude in depicting the veracity of the real life deterioration of the body and psyche.

The film also spends the majority of screen time free of dialogue. This, at times is frustrating, but it also places emphasis on the scenes that contain the spoken word. The scene between Sands and Father Moran is very much a philosophical chess game – checkmate, of course, leading to death.

Though the ending is thoroughly disturbing, Hunger plays with the ordinary as an abstraction of the tragic. The journey to freedom is not a matter of sacrifice or protest; it is the battle with one’s own morality that we must accept to transcend authoritarianism.