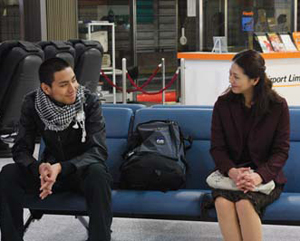 In a small home next to the train tracks in modern day Tokyo a woman cleans up her well kept home. Outside, her husband and son meet together on their way walking home in the alley outside their house. The husband has just lost his job, a secret he dares not tell his family about. They sit and eat a home cooked meal with one empty seat; their other son is out working the night shift.

This is the life of Ryuhei Sasaki, his wife Megumi, and two sons Kenji and Takashi. It is a simple life with real problems, but it is one that is elegantly and beautifully portrayed by director Kiyoshi Kurosawa.

Tokyo Sonata deals with the repercussions that come when the family patriarch loses his administrative job at a medical equipment company in a culture that seems to worship business success. Ryuhei keeps this loss of work from his family and desperately tries to find something to replace it before his next bills or children’s school fees are due. Despite having no work, Ryuhei gets dressed every morning and leaves to wander the city looking for a new job at the unemployment office, finding public places where he can loiter and sustaining himself by eating with other jobless people at local food lines.

Ryuhei is not the only one suffering in his family, however. His wife Megumi notices the anger and frustration Ryuhei exhibits, especially when he lashes out at his son for trying to take music lessons he is unaware his father cannot pay for. This causes Megumi to feel distant from her husband, and for his son Kenji to resent his father. Meanwhile, Takashi is also having little luck with his work at night and is considering joining the American army, something that his father absolutely forbids. By all accounts, Ryuhei’s life and family is falling apart and he seems to be only able to sit with the other men out of work and feel bad for themselves.

Tokyo Sonata is a poignant and touching film that carries a quiet dignity all the way through. It is a thought-provoking story about a family trying to cope with dramatic changes to their way of living and how they can move on and survive in the modern day jungle.